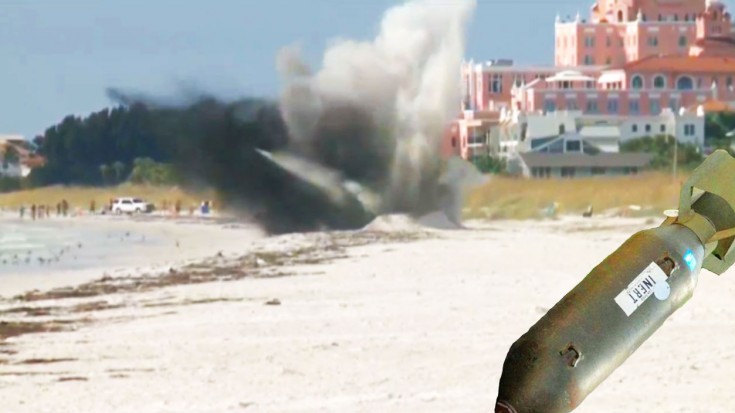 On July 19th, 2015, a passerby noticed what looked like a barnacle covered log on the Pass-A-Grille Beach in Florida. Upon closer inspection, the casual walker decided to call the authorities as the odd object seemed to resemble some sort of bomb. Once the Macdill AFB Explosive Ordinance Disposal Team arrived, they deducted that the object was indeed a M122 Photoflash Bomb which was often used by night recon planes to illuminate targets they’d photograph.

Kind of scary, just amazing, but scary I mean, I wonder how many more are out there.-Anna Womack, Local Resident

Once on the scene, the disposal team decided to evacuate over 100 people from nearby areas just in case. Although not technically a ‘bomb,’ as it wasn’t made to cause injury, its explosive power was not known, especially after all those years. Better safe than sorry, the residents were allowed to view the detonation from a safe distance. Also, they took into account a turtle nest nearby, and protected it from the blast. At the end, the flash bomb was blown up into tiny pieces by C4 explosives and no one was injured.