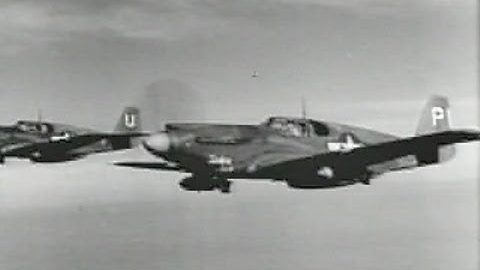 The P-51 Mustang is arguably the best fighter of WWII after it had a proven track record of success against the Axis Powers. The airframe of the Mustang was so good that it would be a waste to simply have it as a fighter. When dive bombing became more necessary as a combat tactic it became clear that P-51 could do the job as the North American A-36 Apache.

Sometimes called “The Invader” the North American A-36 Apache was to be America’s answer the Junkers Ju 87 Stuka. The main difference between the P-51 Mustang and the A-36 Apache is the addition of rectangular dive breaks used to slow the plane in a diving position. Exactly 500 Apaches were built and served in North Africa and the European Theater of War mainly around Italy. These planes also made use of precision strafing on Axis airfields and cargo convoys to cripple supply lines.

“We did not bomb civilian farm houses unless there was reason to believe that the enemy was using them as observation posts; in those cases, we were given specific targets to attack.”

It is very interesting to the P-51 transition into a role that involves bombing rather than going toe-to-toe with other fighters. This restored footage of A-36 Apaches taking on Axis Forces in Italy shows just how effective they were in the dive bombing role.