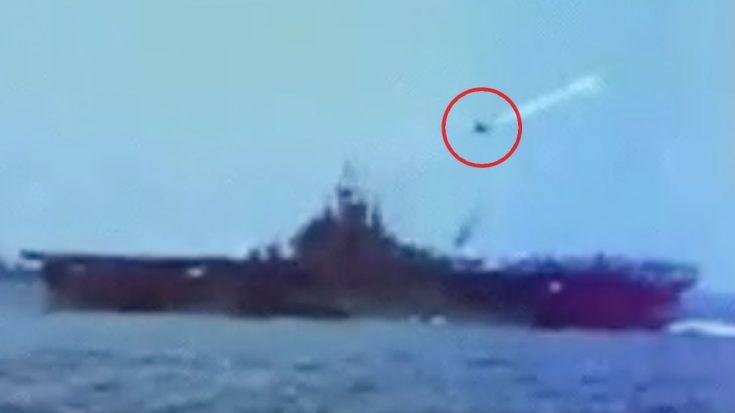 Towards the end of World War II in the Pacific, Japan gave the war effort a last-ditch attempt at winning by implementing kamikaze pilots into their attacks on U.S. ships. Their pilots were given instructions to hit the most crucial parts of ships whenever possible to inflict maximum damage, something the footage below clearly shows.

On November 25th, 1944, Lieutenant Yamaguchi got past the barrage of anti-aircraft fire and set his sights on USS Essex (CV-9). The Essex class carrier was launched in 1942 and was part of many missions in the Pacific Theater, most often on the front lines and on this day got hit not only for the first time but also the hardest.

At 12:56 in the afternoon on that day, Yamaguchi dove his Yokosuka D4Y3 Suisei aircraft into the port side of USS Essex, hitting aircraft on the deck. The aircraft were getting ready for takeoff and fully fueled causing a massive explosion. 15 U.S. soldiers were killed and 44 were injured during those few seconds you’ll see in the video below.