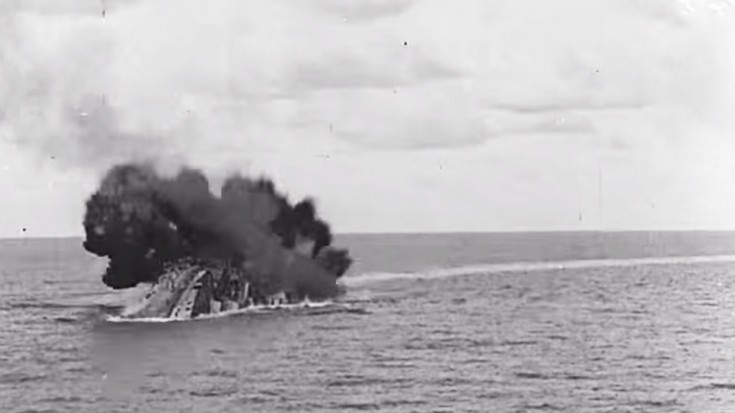 This absolutely heart-wrenching footage was caught on film on November 25th, 1941 by Pathé News. It depicts the events that unfolded when a German U-boat fired at the English battleship and the aftermath.

A day earlier, Barham along with 10 other ships left on a mission into the Central Mediterranean to look for and destroy Italian convoys. What unfolded was pure horror for the English fleet however.

Passing through the security screen, German submarine U-331 got within 400 yards of the battleship and fired four torpedoes. Three of the four hit Barham square in the middle at almost a single point. She was on her side with four minutes and the submarine dove down deep and out of harms way as soon as it was done firing.

An excerpt from a letter sent to the victims families included: “most essential that information of the event which led to the loss of your husband’s life should not find its way to the enemy until such time as it is announced officially…”

As sailors scrambled to get onto the side of the ship and jump into the ocean, things went from bad to worse. The ensuing fire from the torpedo hits got into the magazine room and a massive explosion occurred. Due to the rapid unfolding of events, there was barely anytime for the crew to escape. 862 crewmen lost their lives within those four minutes, yet miraculously 337 survived.

The reason that this incident was censored for the next four or so months was simple. The German submarine returned to base immediately, not assessing the damage they’ve done. To keep up morale, England forbade anyone to speak about the incident, which also included the footage you’re about to see being exposed.