WWII Footage: Paradogs Were Training To Jump Into War Zones 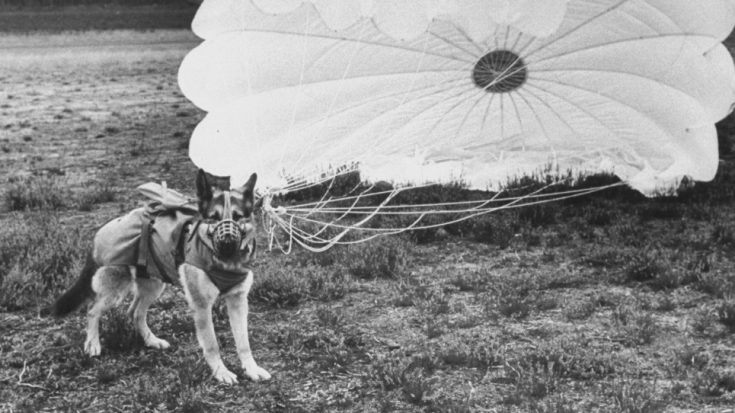 It’s D-Day, June 6th, 1944. The 13th Parachute Battalion of the British Army is preparing to jump. But one paratrooper scuttles towards the back of the plane. He hasn’t trained with anti-aircraft before and the meat he usually happily chases out of the plane doesn’t entice him. Finally, he has to be tossed out of the plane and promptly gets caught in a tree where he will wait several hours to be eventually be rescued.

A Different Kind Of Soldier

The paratrooper was Bing, “a paradog.” He and the two other dogs of the 13th Parachute Battalion, Monty and Ranee, were among many dogs that saw military service during WWII. While Bing didn’t much like jumping on D-Day, he was awarded the PDSA Dickin Medal after returning home to his pre-war family. Paradogs are credited for saving hundreds of lives by locating mines, keeping watch, and warning troops of the enemy’s presence.

Bing was trained by the Army War Dog Training School in Hertfordshire. The young Alsatian collie mix was sent there when his family realized that, sadly, they would not be able to feed him during the war. The dogs were trained to jump out of the plane with the use of meat; they would be given minimal food and water before the jump and follow their human counterparts out of the plane when shown the tasty cut of morsel. Apparently, many of the dogs would jump on their own and enjoyed the skydiving experience.

One pilot said of Renee, Bing’s fellow paradog, “She looked somewhat bewildered but showed no sign of fear. I called out and she immediately turned in my direction and wagged her tail vigorously.”

Animals have served in war for as long as they’ve been domesticated. And they continue to do today. They are incredible assets and formidable, albeit sometimes adorable, foes. It’s hard not to smile when you see a dog floating down from the sky in a parachute. Enjoy the video below of these 1943 military pups making their first jump.