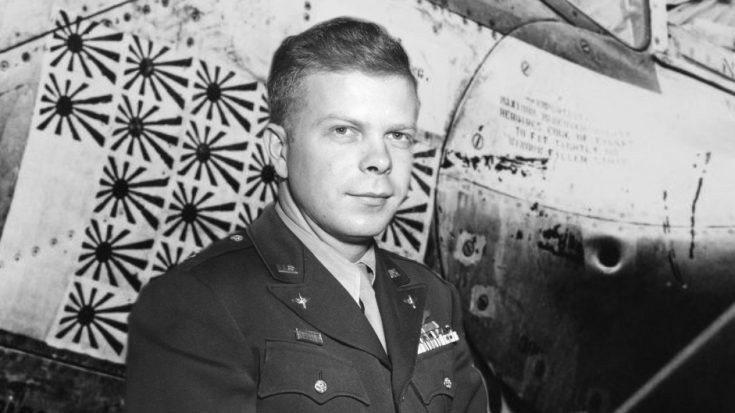 Major Richard Bong was the American Ace of Aces. Serving in the Pacific, he shot down over 40 Japanese aircraft in a Lockheed P-38 Lightning fighter. Here are 5 facts about one of the most decorated fighter pilots of WWII:

5. Bong Caught the flying bug at a young age

Bong was just eight years old when he decided he would become a pilot. The young boy was transfixed when, as fate would have it, President Calvin Coolidge’s mailplane flew right over Bong’s house in Superior, Wisconsin on its way to where the president was vacationing. From 1928 on, Bong was obsessed with planes. A natural, he earned his private pilot’s license on his 20th birthday.

4. His Stunts in San Francisco Earned Him A Spot In Australia

Bong caught the attention of General George C. Kenney, commanding officer of the Fourth Air Force, when he flew very low over the house of a newly married pilot, (allegedly) looped around the Golden Gate Bridge, and blew an Oakland woman’s clothes right off of the clothesline. At the time, Bong was training on P-38s in Hamilton Field. Bong was of course reprimanded for the June 12, 1942 event, but it earned him personal points with General Kenney. Kenney would later make sure that Bong was among the 50 P- 38 pilots he took with him to Australia.

3. He Had At Least 16 Head-On Gun Duel Victories

Despite his squadron mates stating that he hit whatever he fired on about 90 percent of the time, Bong claimed that he wasn’t a good shot. He liked to get extremely close to his target so that he’d be sure not to miss. Head-on engagements were his specialty.  Fortunately, the P-38 had the advantage of superior firepower over the Zero, helping him account for at least 16 head-on victories among his 40 overall.

2. He Continued In Combat When He Didn’t Have To

Major Bong just couldn’t stop. Qualified for squadron command and status as a gunnery instructor, he no longer had to fly in combat. Yet he always flew as a flight or element leader. In December 1944, he was presented with the Medal of Honor by General Douglas MacArthur. Finally, he was taken out of combat and assigned to the Flight Test Section at Wright-Patterson air base in Ohio to work with the Lockheed P-80 jet fighter.

1. News Of His Death Was Front-Page News Along With The Bombing Of Hiroshima

Major Richard Bong was killed on August 6, 1945, the same day of the Hiroshima bombing. There is still speculation about exactly what happened, but it is assumed that either he forgot or was unable to switch to the auxiliary fuel pump during takeoff and his Lockheed P-80 jet fighter experienced a malfunction. Bong ejected but, tragically, his parachute did not have time to deploy as he was too low to the ground. America’s top ace was lost on the very day the war was over.

See the video below for a brief overview of Major Richard Bong’s amazing career.