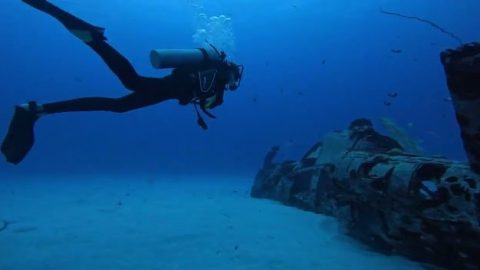 Scuba divers celebrated the end of 2021 by diving 110 feet down to see a World War II Vought F4U Corsair which made a crash landing in the Pacific off the coast of Oahu, Hawai’i.

The wrecked Corsair plane as seen on the video is now covered with lots of corals. Although, unlike the other WWII planes that crashed in the ocean due to an accident, this plane had a different story.

In 1948, Lt. W. H. Holden took out this warplane for a routine training mission from the Molokai Field in Oahu to Ewa Field. Within twenty minutes of being airborne, the plane allegedly runs out of fuel.

Luckily, the pilot managed to make a smooth water landing before the engine could ultimately fail. Lt. Holden was later rescued. The plane remains primarily intact, but of course, could not remain afloat and began sinking.

After over seven decades of sitting underwater, the Vought F4U Corsair located on the southeast side of Oahu, created an attraction for divers and photographers.

The wreck can be found at about 110 feet below seawater sitting on the sand surrounded by strong currents. It is only accessible by boat, but only by professional divers granted access to the watery site.

Watch how the divers’ go and see the plane in the video below.