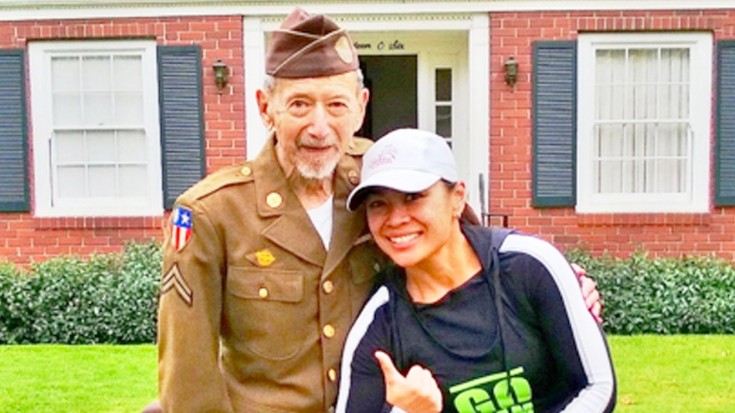 This Is An Absolutely Fantastic Display Of Gratitude.

Although this might seem like a small act, its impact was tremendous. During the 408K Race to the Row in San Jose, CA last year, one racer started a heartwarming gesture which turned into a viral sensation. To add another layer to this great story, it all started with a story of a veteran which then layered on top of another veteran, all in all paying the ultimate tribute to all men and women who have served.

The San Jose 408K race is the official sponsor of the Pat Tillman Foundation. Pat was a true American hero who was a scholar, NFL player and a patriot who joined the Army after the September 11 attacks. Three years later, he paid the ultimate sacrifice for his country. Now, the foundation “invests in military veterans and their spouses through academic scholarships” in memory of this great hero.

It was for this reason that the man you’ll see in this video, Joe Bell, walked out his house to cheer on the runners for this great cause. At 95, Joe put on his World War II uniform and saluted the runners, a way of saying “thank you” for supporting the foundation. A demolition jumper back in the day, Joe was one tough man who wanted to show his support for the people that continuously fight to keep us safe.

What happened next is what beautiful. Seeing the veteran, one of the runners ran up to him and shook his hand saying, “Thank YOU for your service.” After that, most of the runners who were able did the same thing.

Joe Bell, a recent widower after 67 years of marriage, was tremendously moved by this gesture.  He said he had no idea so many people were interested in World War II, a sort of bitter-sweet statement. Those of us who are fascinated with this dark time of our history definitely know about this war and salute any man or woman who served during that time. Even if it’s just a simple handshake that’ll make their day.

His recollection of that moment is sure to move you. Enjoy and thank a veteran today!