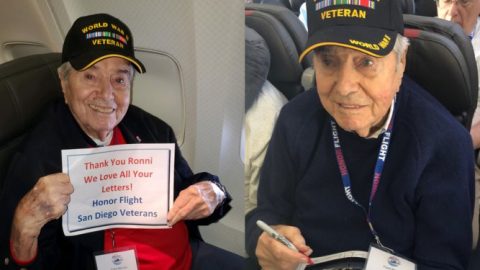 World War II veteran Frank Manchel, 95, had just flown to  Washington D.C. to be honored for his services during the war. He died during his return trip to California, his home state.

Frank, accompanied by his two sons and nephew, flew over to the nation’s capital with the help of the Honor Flight San Diego  – a non-profit organization dedicated to escorting San Diego country veterans to Washington DC to visit memorials commemorating their wartime heroics.

During his flight back home, Frank suddenly collapsed. He was immediately resuscitated but it eventually proved to be futile as he could not be revived. Dave Smith, the Honor Flight’s founder, recalled:

“It was almost instantaneous. He was laughing, chatting, having a good time, and then he collapsed.”

On the bright side, his son Bruce intimated that his father’s passing the ending to the most amazing weekend, as he had met his fellow veterans which he considered to be his “newest best friends.”

Army veteran Frank Manchel died on an Honor Flight returning to San Diego from Washington. He had spent the weekend being honored for his World War II service https://t.co/QZvFhxF5Qx

Frank Manchel served as a US Army Technical Sergeant during the war. The Honor Flight San Diego organization arranged for an American Flag to be draped over his body as he was being taken off the plane. During the solemn procession, his colleagues saluted their fallen comrade. The airline personnel and the medical team that tended him to his dying breath followed suit in paying their last respects.

“They were all saluting him as they went by. It was beautiful.”

Sergeant Frank Manchel has departed, but his heroic service – as well as those who have gone before him – will always be remembered. He died a peaceful death knowing that he had lived a life of valor.

Your memory will live forever, Sarge.