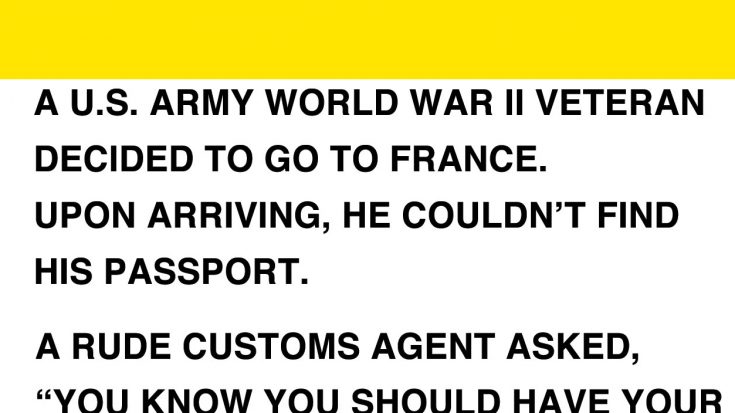 This is one of those stories which has been passed down for many, many years. Although we don’t know if it actually happened, we sure hope it did.

Having talked to a few World War II veterans ourselves, we know they can be quite snappy and don’t take crap from anyone. This leads us to believe that one day, somewhere in the past, this interaction actually took place.

An 87-year-old American World War II Army veteran decided to take his family to France as a last hoorah. Everyone was excited to go, so they took their vacations, booked their flights and off they went across the big pond.

After exiting the plane, the vet approached customs and was asked by the agent for his passport.

He fumbled a bit to look for it in his bag but couldn’t find it. His family came to his aid, but the French agent was incredibly impatient and rude.

“Sir, have you ever been to France?” he asked.

The veteran respectfully answered that he had.

“Well, you should know then that you should have your passport handy when entering France,” he said rather harshly.

Without missing a beat the vet fired back, “To be honest, the last time I was in France was on D-Day in 1944 and there wasn’t a Frenchmen in sight to show my papers to.”