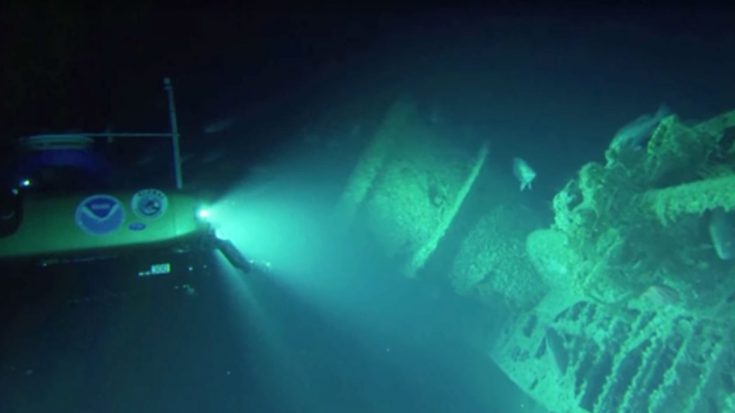 World War II was a war then encompassed the entire world. However, when it comes to the locations of combat we often think of war-torn Europe or the Pacific Ocean. Not many people know that there was a war being fought in America, right off the coast of North Carolina.

German U-boats attacked merchant ships around these shores and engaged against planes and Navy vessels. Explorers from the National Oceanic and Atmospheric Association began to explore the remnants the Battle of the Atlantic.

“We have discovered an important battle site that is part of the Battle of the Atlantic. These two ships rest only a few hundred yards apart and together help us interpret and share their forgotten stories.”

In these depths lay the wreckage of planes, a German U-boat, and a navy freighter. The U-boat managed to sink the freighter but its crew evacuated safely but the Navy retaliated against them. The U-boat sank with its crew of 45 entombed as they sank to the seafloor. 92-year-old Louis Segal was aboard a Navy destroyer on missions to destroy U-boats and was invited to join their exploration.

“After D-Day, we were sailing up and down that coastline looking for submarines because they were ripe all along that east coast. Also, we did convoy escort protecting ships, about 50 ships in a convoy and there would be seven or eight of us destroyers.”

Two years after the discovery of this Atlantic graveyard researchers are finally exploring the America’s forgotten battlefield. Take a look at this never before seen piece of World War II history in this clip.