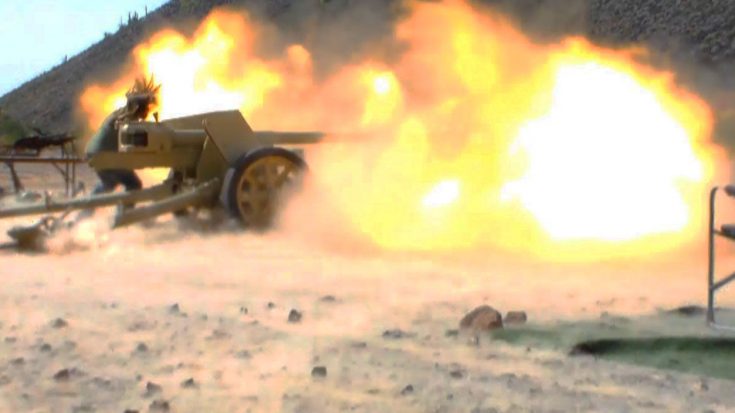 They say that an animal backed into a corner will always put up the fight of its life. That must have been the feeling that Nazi Germany had when they were being invaded by the Allied Forces and Soviet Russia. Late in the war, the Germans became desperate and began to develop their most powerful weapons of war in a vain attempt to drive back their enemies. One of these weapons was meant to stop invading tanks with incredible results the Pak 40.

Developed by Rheinmetall in the early 1940s the Pak 40 became a staple of the German military after the Russian invasion. This tremendous anti-tank gun could fire a 15-pound round at speeds of 2,600 feet per second, it could tear through tanks without any problems.

“Sent immediately to the eastern front, the Pak 40 was an excellent anti-tank gun, quickly feared by the Soviet armored divisions. Its remarkable efficiency has led the German engineers to reuse the Pak 40 gun to equip the latest produced tanks.”

It was a very effective weapon to destroying tanks but it was ultimately too little too late for Nazi Germany to stop the Russian invasion. The Smithsonian Channel took a visit to a firing range that is home to a Pak 40 to demonstrate its destructive power seen in this video clip.