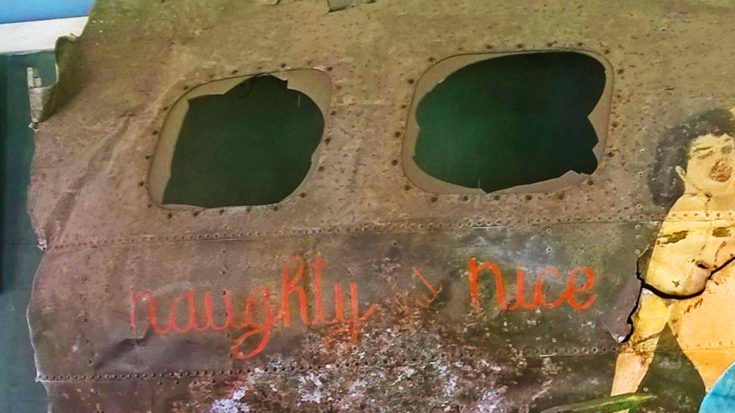 An incredibly talented artist by the name of Ron Cole is now offering a once in a lifetime opportunity to get a piece of a historic B-17 Flying Fortress right on your wall. Although his craft is painting as you can see in the picture below, (and more on his Facebook page here) he somehow got his hands on these historic pieces and will be selling them in frames and with descriptions.

Below is the entire post the page released so you can have all the important information including a link to preorder a piece if you choose to. It’ll come framed and with information like the sample picture below.

Preorder one of the most historically significant relic displays we’ve ever offered.

Purchase of this $100 (USD) refundable deposit guarantees you one of the soon to be released relic displays for this very historic aircraft: Boeing B-17E ‘Naughty But Nice’ s/n 41-2430.

In recent months, three of four relic display series by Ron Cole have completely sold out within 24 hours – one, within 2 hours. Since this B-17 display will be in unusually high demand, and will only run fewer than 15 signed and numbered pieces, we want to give you an assured opportunity to acquire one.

Format: The artwork, presently in progress, will be a fully original composition that depicts this aircraft in combat with Japanese Ki-43 ‘Oscar’ fighters during the Battle of the Bismarck Sea.

This B-17E was an early type, manufactured by Boeing in Seattle. It was originally unpainted, in pre-war livery. On December 7th, 1941, this aircraft was one of the famous flight of B-17s that was inbound during the Japanese attack. She was redirected to land at Haleiwa Field, and participated in the search for the Japanese task force after the raid.

In February 1942, ‘Naughty But Nice’ was ferried to Australia, then Port Moresby, Papua New Guinea, after having been painted in an unusual three-color camouflage. The aircraft was assigned to the 43rd BG, 65th BS.

On March 3rd, 1943, this aircraft participated in the Battle of the Bismarck Sea. She was attacked by Japanese Ki-43s of the 11th Sentai, and severely damaged. Two patched bullet holes from that action are preserved on the nose section acquired by Cole’s Aircraft. The aircraft was repaired and returned to action.

On June 26th, 1943, ‘Naughty But Nice’ took off from Dobodura Field at 1:43 AM on a night bombing mission against Japanese-held Rabaul. She was intercepted by a Japanese J1N1 ‘Irving’ night fighter piloted by Shigetoski Kudo. The fighter approached unseen, and shot down the B-17 using its oblique-firing 20mm cannon. This action is described in the book, Moonlight Interceptor.

SHIPPING CHARGES: You will automatically be charged shipping with this deposit due to store configurations. It’s calculated into the deposit total, and is refundable in the event you wish to cancel your order for any reason.

The original nose art is preserved in Papua New Guinea, along with the cockpit area and other items recovered in 1984. These relic displays are made from material from the other side of the nose area from where the nose art was preserved. The pitot tube has also been acquired by Cole’s Aircraft, and is from the nose art side of the nose section. Two patched bullet holes, from the aforementioned Bismarck Sea action, are preserved in the port side aluminum. They will not be cut up, or offered in these relic displays!

You can also see a sample of Ron’s work in the YouTube video below.