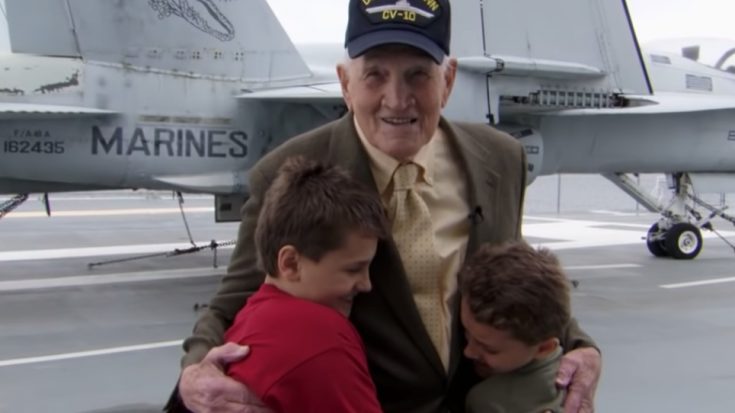 From Games To Living History

It all started with a game of battleship.

The game is perfect for twin brothers to play, but it didn’t take long for Carter and Jack Hanson to become more interested in the ships the game represented than in the game itself. This led them to visit the USS Yorktown on a surprise stop during a family trip.

That’s where they met a Yorktown veteran’s sister who, probably sensing their keen sincerity, gave them her brother’s email.

Thus began an unusual but genuine friendship between the two young boys and Robert Harding, who had handled planes aboard the carrier. They excitedly emailed him with questions about war and ships and history. Mr. Harding was thrilled to respond.

Finally, Carter, Jack, and Robert met face to face at a special meeting on the USS Yorktown. Luckily for us, the meeting was filmed. Their reactions will definitely make you feel like someone’s been cutting onions.

Fast forward a few years and the boys, now teens, aren’t any less involved. They attended the Yorktown’s 75th anniversary in 2018, where they spoke in depth with many of the attending veterans.

Unfortunately, at 92 years old, Harding was not able to go. But the twins made sure to send him gifts, including a flag that once flew on the Yorktown and an autograph from Eleanor Roosevelt’s great granddaughter Nancy Ireland.

Even if they don’t see each other, the boys still email Harding several times a week.

This is absolutely how children should be raised. These boys have outstanding character. And as for Harding, he says:

“I am very touched by the boys and their attention to me because it’s so unusual that the boys are attached to somebody like me.”

See the amazing moment captured below.