30% Scale A-1 Skyraider Takes To The Skies 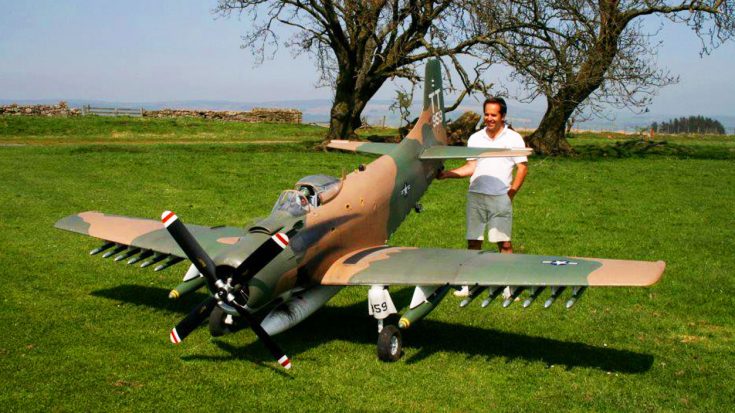 These Guys Are Good.

We’ve got to admit. Although we were avid fans of World War II warbirds from as early as we can remember, remote control planes wasn’t something we really knew about. Not that they’re not cool or interesting, it just wasn’t something we were introduced to. Now that we’ve built this community at World War Wings however, we started getting exposed to more and more new things, and RCs became one of them. Now, we can’t get enough of them.

It’s not only the fact that they’re our favorite types of planes, but the work that goes into them. Flying them takes a whole lot of skill (and nerves since they cost a small fortune) and most of the big ones are custom built. Such is the case of this A-1 Skyraider.

This Skyraider is powered by a Moki 400cc Radial, has a wingspan of nearly 10 feet and weighs some 182 pounds.

Scratch built by Phil Clarke who works at Fighter Aces, it was Ali Machinchy who flew it. This guy made RC flying his life and livelihood, so he’s kind of a big deal in the RC circuit.

As you’ll see in the video, he can certainly handle a big RC like that. The video below is about 10 minutes long so skip around if you want to, but do watch the end. Ali lands that thing so gently it’ll almost bring you to tears. Such grace.