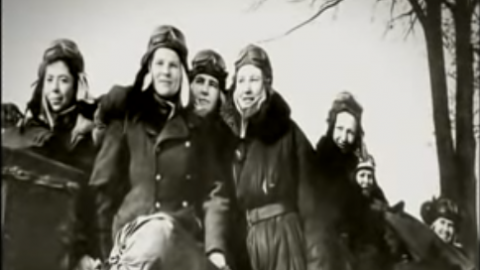 The idea of an all-woman squadron was conceived by Marina Raskova – the first female pilot of the Soviet, for which she had earned her moniker the Soviet Amelia Earhart.

The German Blitzkrieg displayed its full destructive glory with the lightning-fast invasion of the Soviet Union, anchored by a massive four million-strong army. By fall of 1941, the Red Army had been desperately fending off the ruthless German siege of Leningrad. Stalin was becoming desperate.

And in October, Joseph Stalin himself ordered Raskova to form her bombing squads. The Soviet High Command concurred with this plan and remarked that “heroic women made good propaganda.” But these brave patriotic women set out to prove that they were more than just that.

Thus, the Night Witches were born to make the Nazis’ nights longer.

1. They were so fearsome and so loathed that the Nazis automatically awarded the Iron Cross Medal to a pilot who had shot down a single Witch.

The Iron Cross signified the extreme acts of bravery done by a German service member, usually a series of acts with a huge impact on the Nazi war effort.

So it was really odd that a pilot would automatically earn the coveted Iron Cross Medal by shooting down a low-flying, deathly-slow Night Witch aircraft – a testament to the fearsome reputation of the Night  Witches.

2. The 588th Night Bomber Regiment dropped more than 23,000 tons of bombs on their Nazi targets.

Major Yevdokiya Bershanskaya led the Regiment over daring missions such as the Battle of the Caucasus, where they helped successfully defend the key city of Vladikavkaz by flying 2,920 sorties throughout the operation.

But they were not limited at the home front: In August 1944, they also participated in Nazi-weeding operations in Poland and in numerous offensives on the Eastern European Theater.

3. With the formation of the three women’s air units (which included the 588th Regiment), the Soviet Union became the first country to officially deploy female pilots in combat operations.

4. The Night Witches flew throwback planes which were mainly used as crop-dusters and as training aircraft.

The Night Witches dropped their bombs with the Polikarpov Po-2 plane – an aircraft that was introduced in 1928 and utilized during the war as a training aircraft.

Its wood-and-canvas frame made it dangerously light, slow, and devoid of any protection. But these attributes made them annoyingly dangerous because it made them into very elusive targets for the lightning-fast German fighters.

Moreover, there were also absurd rumors amongst the German soldiers that these women took special injections that transformed their eyesights into cat-like night vision.

5. These Heroines suffered extreme prejudice and neglect from their peers, on and off their operations.

The unforgiving Russian weather exposed the Night Witches to the freezing night winds. According to squad commander Nadezhda Popova, they risked getting frostbites when they looked to see their targets better, and that the strong winter winds easily tossed their flimsy planes.

Despite their effectiveness, their gender made it impossible to earn the respect of their male counterparts. They were constantly belittled, and they had to make do with the worn-out equipment and uniforms handed to them.

Despite these insurmountable hardships, the Night Witches embraced their identity and rightfully earned their place in the annals of the Second World War. They were the heroines that everyone should know about.