The “Idiotic” WWI Aerial Formation The Allies Used In The Second World War, And How It Dealt Them Huge Fighter Losses 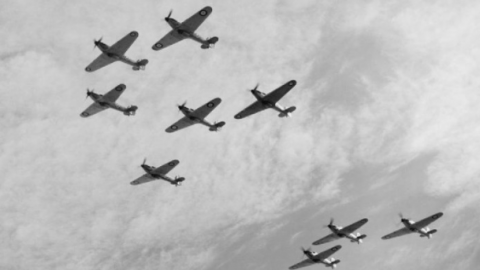 After Morane Monoplanes played a huge role for the French as intel-relaying observers in the Miracle of the Marne in 1914, the Germans quickly realized the need to destroy these reconnaissance planes.

On August 1, 1915, Oswald Boelcke and Max Immelman of the German Air Force engaged in the first real use of the aircraft as a war machine with the legendary Fokker fighter plane.

Boelcke also formulated the Dicta, the world’s first tactical principles in aerial combat. One of the principles that are still honored to this day is the need to maintain formational integrity at whatever cost.

But what worked in the first world war does not mean that it would work out just as well when another world war rolled around. The tactics and strategies must keep up with the more advanced aircraft in order to be victorious. The Column Formation of World War I was too impractical for combat, that’s why a tactical innovation was introduced: The Vic Formation.

The Vic Formation, however, was ineffective in WWII warfare for two major reasons:

The leader cannot communicate with his squadrons, which increased the risk of following the leader and scattering once they came under enemy fire.

In a radio-free world, the air forces at the time had to communicate through hand signals and wing flashes. The formation made it impossible to relay the command to maintain formational integrity. If flight leadership is lost, so are the chances of winning the dogfight and the war.

#OTD 1916 – Both Oswald Boelcke and Max Immelmann, for achieving eight aerial victories each over Allied #aircraft, receive the #German Empire's highest military award, the Pour le Mérite as the first German #aviators to earn it. Both will be dead by the end of the year. #WW1 pic.twitter.com/OWY4fAwpGV

Vic formations were so tight that the wingmen must always watch the lead plane, often at the expense of monitoring enemy planes.

The prevailing doctrines at the time heavily emphasized formation integrity at the expense of adequately surveying the skies for approaching enemies.  To exploit th Vic’s inherent weakness, the German planes’ Rotte formations – which eventually combined to form Schwarms –  loosely operated at different altitudes and were able to swarm the Allied fighters and go for the kill.

The formation was so risky that the Germans mocked it as Idiotenreihen (or Row of Idiots) and easily exploited it with the aggressive Finger-Four Formation.

The remedy to allow only the lead plane to scout for enemies did not sit well with the Royal Air Force pilots, so they also adopted the Finger-Four formation.

If you can’t beat them, imitate them.

BONUS: The Vic Formation was a product of the Allies’ lack of imagination.

During the interwar years, the Luftwaffe perfected their air force and the craft of aerial combat after their humiliating defeat in the First World War and the more humiliating deal they got from the Treaty of Versailles. The Allies, on the other hand, basked in vainglory and never saw the imperious need to advance their warfare doctrine as a whole.

In particular, this repugnance to the realities of modern aerial warfare came to haunt the RAF during the Battle of France, as the Luftwaffe had no problem tracking down and tearing through the close-flying Hurricanes and Spitfires.