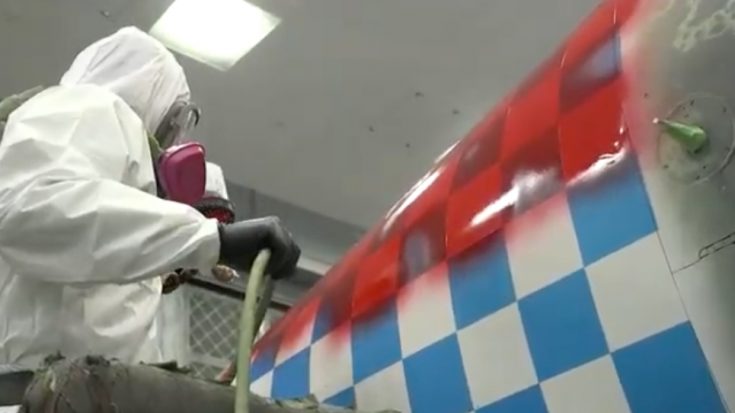 It’s almost the 75th anniversary of D-Day.  To mark the occasion, the 48th Fighter Wing will be presenting 3 “heritage” aircraft. One of them was just revealed.

While no one is going to mistake an F-15 Strike Eagle for a P-47 Thunderbolt, it’s pretty cool that they are doing this.

The 48th Fighter Wing (also known as the Liberty Wing), based at RAF Lakenheath, took the time to pay tribute to WWII’s rich aviation history by painting an F-15 Strike Eagle with all the marking of a P-47 Thunderbolt.

The jet now sports a checkered nose, stripes, and even a Statue of Liberty on the tail.

The design was well thought out. They picked this one out of 25 potential designs after narrowing it down to the top 3.

The project took 640 hours over a 15 day period and cost $15,000 worth of paint and painting equipment. They wanted to get it just right!

And we dare say that they did get it just right. The finished product is a beautiful combination of modern jet and the legendary P-47, nicely tying the present to the past. The airmen who worked on this project feel strongly about it. As one of them says,

“…it was a good experience for all of us. It’s something that will represent the Liberty Wing, past and present.”

We can’t wait to see the next two heritage aircraft!

Check out the video below of the process.