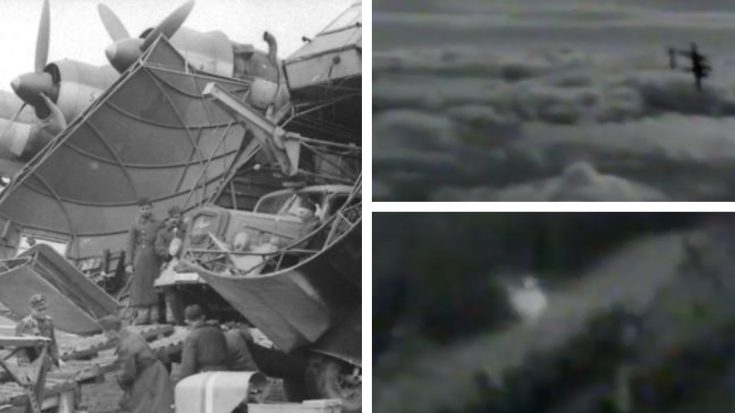 The Gigant – Big But Devastatingly Slow

In 1942, the Germans built a monster. They called it the Me-323 Gigant, and it was the largest land-based transport aircraft of the entire war. They intended to use it to mount an invasion across the English Channel, also known as “Operation Sea Lion.”

That operation never happened, as we know, thanks to the strength of the RAF…and also thanks to the vulnerabilities of the Me-323. While the giant could lift a crazy amount, its defenses were dismal.

“In a war theater, they were too slow to survive and were easy meat for any Allied fighter the happened to blunder into. [They were] unable to run and virtually defenseless, despite the slots for the passengers to fire off their rifles through.”

It Didn’t Have A Chance Against A P-38

Unfortunately for its crews, passengers, and loads, it was sent instead to transport between Sicily and Tunisia. Transportation by sea had become too vulnerable, but air transportation by the slow and defenseless Me-323 was arguably even worse. Their large load capacity basically meant a large and easy kill for any Allies on the hunt.

“Their cargo capacity, rated at 15 tons, was great; in terms of heavy equipment, they were each capable of carrying either two four-ton trucks or an 88-millimeter Flak gun with its entire compliment of equipment, ammunition, and gun crew. The heavy cargo capacity sometimes strained the six engines, thus they were sometimes equipped with four rockets to assist with takeoffs.”

You’ll see just that in the last minute of the video below. A P-38 Lightning, cutting through the air with its signature elegance, isn’t challenged in the slightest. It’s a bit sad to see the whale of an aircraft explode on the hills below knowing that it never had a chance.