B-52 Flies Over Nascar Race During Anthem 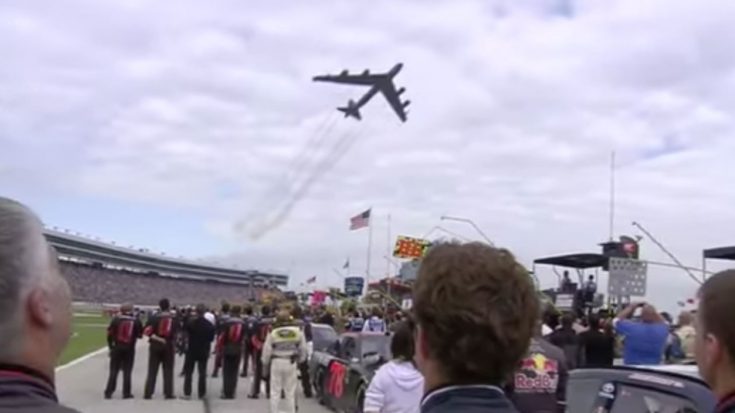 Now That Is Beautiful.

Sometimes we get accused of being too ‘murican, but whatever, we’re not going to apologize for that. As avid aviation fans, especially of World War II warbirds, it’s the pride in our technology past and present that drives us and when we see something we really like, well, we share it with you.

Having said that, what’s not to love about a B-52 Superfortress, America’s primary bomber, flying over a Nascar race in Texas during the ending notes of our national anthem? If that doesn’t make your blood turn red, white, and blue then nothing will. Not to mention that the sound of the B-52’s screaming engines comes in just at the tail end of the Star Spangled Banner as if it wanted to finish it with a bang.

This video was taken back in 2011 so it’s a bit dated, but it might be the most American video on Youtube. That might be an opinion but we’re sure most of you will agree with that statement.

Also, that’s Trace Adkins singing as you might be well aware. Six feet and six inches tall with a massive build, this country star can do as much damage to a small group of city thugs as a B-52 to a village full of ISIS. Yeah!