Fleming Begaye Sr. – Navajo Code Talker – Has Died. He Was 97 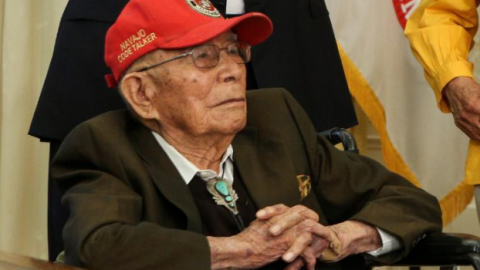 Begaye was one of eight remaining code talkers whose immense contributions to the Allied efforts has been finally recognized after years of obscurity.

Jonathan Nez, President of Navajo Nation, announced Begaye’s departure on Friday. He died in his home in Chinle, Arizona.

From 1943 to 1945, Begaye was a code talker in the Pacific Theater, seeing round-the-clock service at the Battles of Tarawa and Tinian. The Navajo Code Talkers of the Marine Corps were tasked to transmit information on enemy tactics, movements, and battle orders by using a modified version of the Navajo language – one that is so complex and undecipherable that an untrained Navajo couldn’t have figured it out, let alone Japanese codebreakers. 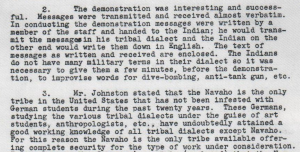 The code talker program was the brainchild of World War I veteran Philip Johnston, who was fluent in the language. He justified the use of Navajo by demonstrating its unique syntax and complex system of tonal qualities – making it the perfect cloak for the unimpeded relay of information during the fastest-paced actions in the Pacific Islands. The Navajo Marines memorized the program’s formulated dictionary under simulated combat conditions, where they showcased the computer-like speed and precision in the transmission and decoding of English messages.

In light of the Allied advance towards Iwo Jima and the Code Talkers’ mesmerizing display of code transmission brilliance, Major Howard Connor of the 5th Marine Division remarked:

“Were it not for the Navajos, the Marines would never have taken Iwo Jima.”

The Iwo Jima campaign, in particular, was the peak of their glory. There, they tirelessly worked night through the day and passed 800 error-free messages in just two days.

We lost a great man. Prayers to his loved ones. ? ❤

The contributions of the Navajo Code Talkers is unpayable. The language of our people was the difference maker in WWII. Thank you for your service! ?@NavajoCodes @NavajoTweets #NativeTwitter https://t.co/0XN154NkAU

Just last week, 95-year old WWII veteran Frank Menchel died on his return flight from a tour of war memorials in Washington D.C. It is truly heartbreaking that our war heroes are slowly dwindling: Now, we must all do our part to ensure that their collective heroism is immortalized by living to tell their tales, and by living the freedom they risked their lives for.

Thank you for your service, and may you rest in peace, Marine.