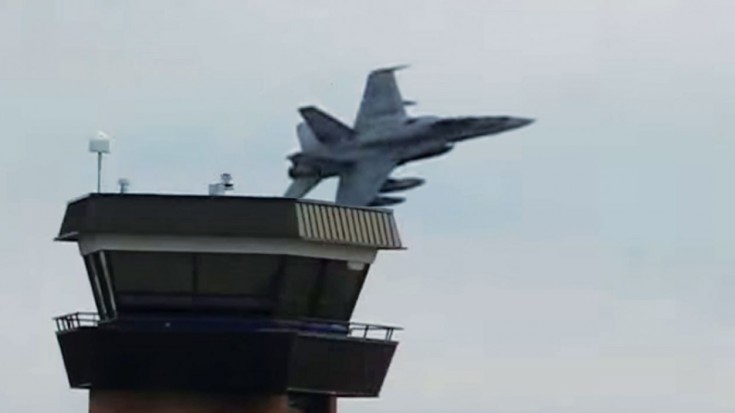 Let The Comments Roll In.

Sorry, but we’re going to say it before you do. “Negative Ghost Rider, the pattern is full.” There. We get that on every tower buzz and never have a chance to beat you to it. Now we finally did and we’ve got to admit, it feels good.

Now that we got that out of the way, let’s get to the video. It’s really simple, as the headline says. A Canadian pilot buzzed the tower at the Price George Airport in British Columbia, Canada. We’re thinking it must have been staged as he did it multiple times. Once you watch it, you’ll wish you were in that tower though.

The Royal Canadian Air Force has 73 active CF-18s in service.

As for the plane, it’s a CF-18. The “CF” designation means it’s a Royal Canadian Air Force Hornet. Its official military designation is actually CF-188, but for simplicity pilots say it’s a CF-18.

The plane is completely based on the F/A-18 Hornet with little or no changes done to the plane. The key difference is the false canopy painted on the underside which is not used by the USN, but is visible on USMC models.