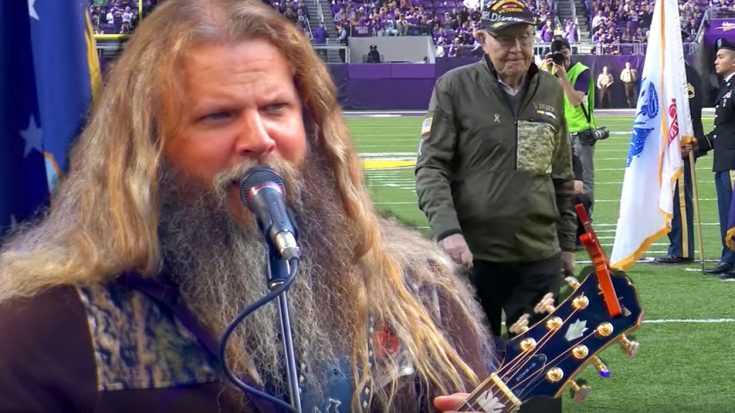 Thank You All For Your Service.

There aren’t many things in this world that send chills down our spines, but this song performed in the setting you’ll see in the video is just beautiful. Honoring veterans in front of thousands of people is just extremely moving and the quivering lips of some of them prove it.

During a Minnesota Vikings game against the Rams, the halftime ceremony was dedicated to honoring veterans of all wars. Calling it the “Salute to Service,” veterans from World War II to the most recent war in Afghanistan, Iraq, and Syria walked out into the stadium and the reception was stunning. The crowd was clapping and cheering to show their utmost respect for what they’ve done for them.

That was my tail gunner ole Johnny Magee
He was a high school teacher from New Orleans
And he had my back right through the day we left.

–In Color Excerpt by Jamey Johnson

Between the crowd, the song, the veterans and the pictures of them during their service, the ambiance was completely heartwarming. There’s really no better way to honor those who have served so we all can enjoy the freedoms we now have.

Major respect to anyone involved in making this happen.