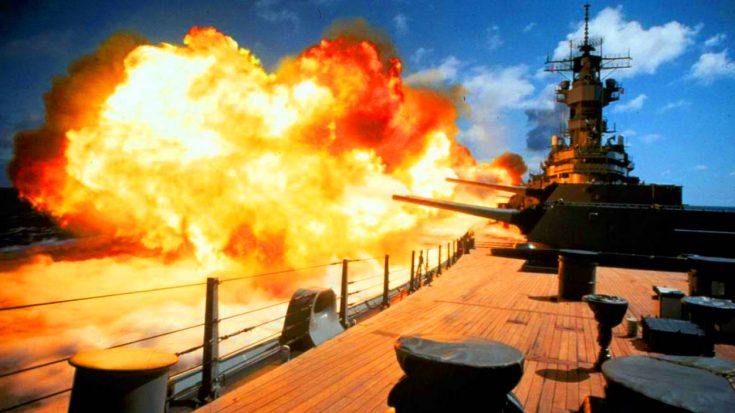 Mighty Mo Comes Out Of Retirement.

There are few vessels with a more proud legacy than the USS Missouri. Often called “The Last Battleship” because it was built in 1944, a time when battleships were considered outdated. Despite the claims that battleships were too old to fight, this legendary battleship went in for one last round to take down Sadaam Hussein during Operation Desert Storm.

When the naval warfare was moving towards aircraft carriers the USS Missouri still fought in the Pacific. It was the place where Japan’s final surrender was issued and WWII officially ended. But after the Korean War, we didn’t see too much of Mighty Mo because naval warfare had shifted away from battleships and was more focused on aircraft carriers.

Mighty Mo went against the odds and was given upgrades by the Reagan Administration in order to hold its own for a modern battlefield. The USS Missouri was equipped with Tomahawk missiles, modern radar, grenade launcher and Phalanx turrets to name a few. After 40 years without seeing a battle, the USS Missouri was pulled into action when the Iraqi army launched an invasion of Kuwait. Sure it had quite a few upgrades that made it competitive against hostile targets, but they all paled in comparison to those massive 16-inch guns.

“As the shelling began, the ship’s Pioneer unmanned aircraft that spotted targets for the Missouri’s 16-inch guns buzzed overhead in the dark between shells detonating all over the coastline. The initial diversionary bombardment of the shore was both terrifying and demoralizing for the dug-in Iraqi troops.”

If it ain’t broke don’t fix it, but those guns broke a lot of Iraq’s deadly forces and provided an opening for American forces. It gives you chills to watch the legendary USS Missouri fire its guns on an enemy for the first time in 40 years as you can see in this clip.