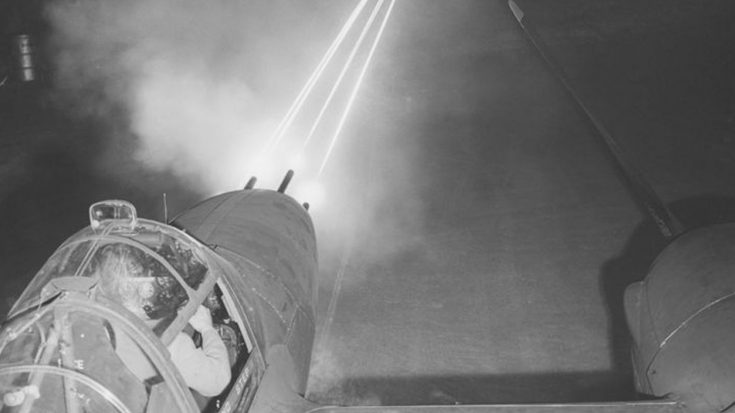 It is really hard to think of a bad plane that saw combat during World War II. For the most part, these aircraft were great and fiercely competitive with each other. Many features define these warbirds such as speed and agility. However, they wouldn’t be warbirds if not for their weapons. “Manners maketh man” but here weapons maketh warbird. So in this article, we are going through the Top Ten Warbirds based on weaponry.

One of the heaviest fighters of WWII the P-47 could also do heavy damage with its eight machine guns on its wings. It worked as a fighter as well as a bomber and carried a payload about half that of a B-17.

It’s no shocker that the P-47 Lightning made this list. It was one of the most effective Allied fighters of World War II until the appearance of the P-51 Mustang. The Lightning was the fighter of choice for America’s top ace, Richard Bong who achieved 40 aerial victories. This fighter was used in the Pacific and in the European Theater of War. The destructive firepower is demonstrated in the following video using a P-38 gun that was frozen in snow for 50 years.

Designed by Jiro Horikoshi the A6M Zero was the crowning achievement of Japanese aircraft. Designed for agility and long-range, this fighter ruled the skies over the pacific during the early stages of World War II. Zeros have a wide assortment of weaponry which included two 7.7mm machine guns, two 20mm cannons and two 132-pound bombs. New American fighters had to be designed around the Zero to keep up with their pace. Eventually, Allied fighters were able to exploit the weaknesses of this agile fighter due to its weak armor. The Zero could dish it out but it couldn’t take it. It may not have much in the armor department but there was no doubt it could destroy its targets.

“Japan went to war out of foolish arrogance, caused trouble throughout the entire East Asia, and ultimately brought destruction upon itself… but for all this humiliating history, the Zero represented one of the few things that we Japanese could be proud of.”

The Ki-84 Hayate doesn’t get the attention of its cousin the A6M Zero, but it was more powerful. As a mixed attacker, it carried two 0.50 caliber (12.7mm) machine guns, two 20mm wing cannons and up to 1,100 pounds of bombs under wings. Nicknamed “Frank” by the Allied Forces the Ki-84 was probably the only fighter capable of intercepting a B-29, going toe-to-toe with P-51 Mustangs and bombing Navy destroyers. Unlike the Zero the Hayate had armor to make better use of direct attacks against enemy fighters. It was an incredible plane but it showed up when Japan was already losing the war to the United States, too little too late.

The B-25 has an amazing set of weaponry onboard. What made this gunship stand out was its 75 mm M4 cannon, one of the biggest of WWII. Due to its heavy armor, the B-25 is able to take several hits and remain functional allowing it closer proximity to targets.

“The North American B-25 Mitchell, a twin-engine bomber that became standard equipment for the Allied air forces in World War II, was perhaps the most versatile aircraft of the war. It became the most heavily armed airplane in the world, was used for high- and low-level bombing, strafing, photoreconnaissance, submarine patrol, and even as a fighter and was distinguished as the aircraft that completed the historic raid over Tokyo in 1942.”

Allied planes didn’t encounter the Soviets very often but it’s probably for the best that they didn’t stare down a Yak-3. It featured two 0.50 caliber machine guns and a 20mm cannon firing on the nose for added accuracy. The Allies may not have faced the weapons of the Yak-3 but the Germans did, scoring 273 aerial victories against the Luftwaffe.

It may have been the top American fighter during the war and its guns shot it up to this spot. Armed with six 0.50 caliber (12.7 mm) AN/M2 Browning machine guns it could tear through its enemies. The Mustang’s firepower allowed it to turn the tables of battle against Japan at the beginning of the Pacific War. It maintains incredible firepower without recoil affecting the frame to ensure great stability during combat.

The Bf 109 was the pride and joy of German aviation during World War II. With its two 7.9mm fuselage guns and two 20mm wing cannon it didn’t have much trouble taking down Allied planes. The Bf 109 was the fighter of choice for many top ace pilots including Erich Hartman, who claimed 352 victories. The different guns on the Messerschmitt allowed it to maximize damage against targets however they came with a price. Guns from different manufacturers proved to be expensive and slowed down production. As a result, Germany could not produce enough aircraft and became vulnerable to bombing attacks in the final years of the war.

Big, very big and powerful. One of the most recognizable bombers because it defined the bombers in World War II. The B-17 Flying Fortress was crewed by ten and had 13 0.50 caliber machine guns to tackle enemy fighters during raids. Many consider it to be the most recognizable aircraft of WWII and only one plane can outmatch its weaponry.

It’s hard to argue against this bad boy because the B-29 bomber could probably win battles all by itself. Manned by a crew of 11 which included four gunners, the Superfortress was a tough nut to crack. It’s primary role as a strategic bomber carrying a 20,000 lbs payload resulted in less agility during combat missions. The B-29 possesses the ability to fly higher than most enemy fighters and could destroy them if they come close. Equipped with four gun turrets and several cannons it could make short work of most threats. Although it’s not in the standard model, B-29s were able to drop atomic bombs on Hiroshima and Nagasaki. In the end, the B-29 had the power to end the war, which is it is the #1 Warbird Weapons.