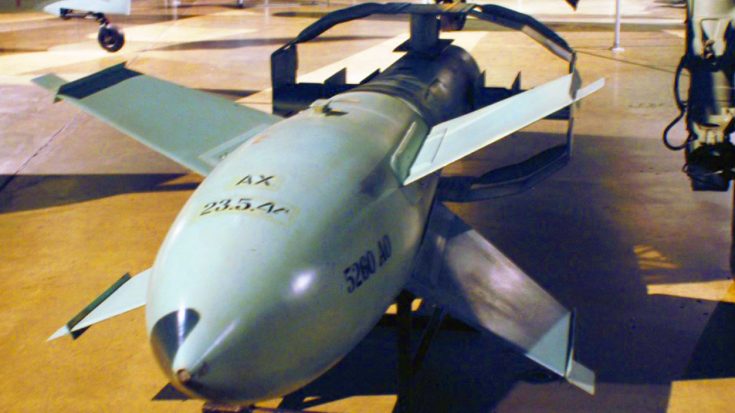 Bombing missions during WWII were performed by huge planes dropping massive amounts of munitions over target areas. The idea was that just a few of these bombs would hit the intended target in a general area. However, there was a bomb that came along and changed bombing forever the first smart bomb the Fritz X.

In modern-day warfare, precision-guided bombs are fairly routine but they actually have origins in Germany. The Fritz X was the world’s smart bomb, a simple yet brilliant design that yielded deadly results. This bomb earned the X in its name for the X-shaped steering mechanism on its tail. This mechanism along with a radio-controlled steering mechanism actually allowed a bombardier to steer the Fritz X to its target upon its descent.

After Italy defected against the Axis Powers, Germany sought to retaliate against their former ally. Bombers tracked down Italy’s flagship the Roma and launched a single Fritz X which successfully landed in the middle of her hull, sinking the ship immediately and taking nearly 1,400 lives with her.

“Germany’s first and most spectacular success with the Fritz X came in September 1943, when Do 217 aircraft sank the Italian battleship Roma and damaged the battleship Italia as they were sailing to surrender to the Allies.”

The Fritz X proved that precision can be deadlier than sheer numbers and inspired a new generation of targeting bombs. War historians go into further detail on the development of the Fritz X and the destruction of the Roma in this clip.