WWII: The ‘Bat’ Bomb Was A Real Weapon 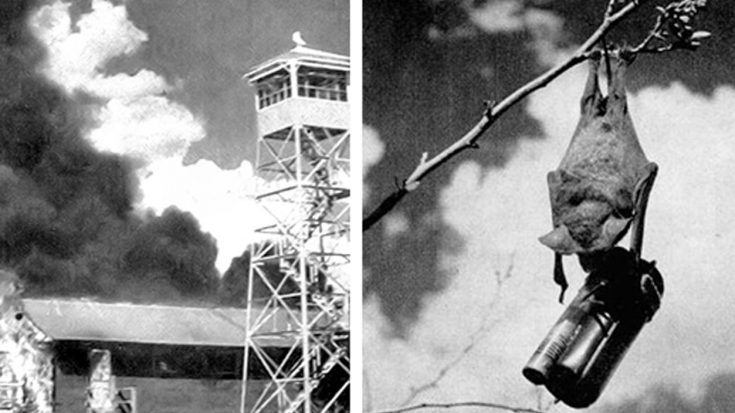 The idea of Bat Bombs might draw up the mental image of Adam West dressed as Batman running through the streets with a huge bomb over his head. But as ridiculous as that sound, there actually was a project in WWII that used live bats for bombings.

Easily one of the weirdest ideas to come out of WWII were weaponized bats with bombs attached to them. The idea originated from a program that used pigeons to guide bombs but it was eventually scrapped due to high costs. They sought a cheaper alternative using live creatures and were turned onto the idea of using bat bombs.

The idea focused on strapping incendiary bombs to the bodies of bats and then dropping them on hostile territories. They would be housed in refrigerated containers and enter a state of hibernation and after being dropped they would see out shelter in buildings and the bombs would detonate.

The most surprising part about this idea is that the bat bombs actually worked, but they worked too well. During the testing phases, the bats would escape and they actually set fire to buildings on the military base. Eventually, the bat bombs were deemed for too unstable for controlled results and researchers began to divert their resources into the atomic bomb instead.

This short video dives deeper into the program that used bats as incendiary bombs, it’s so weird to know that it actually worked.