12 Interesting Facts About The B-52 Bomber 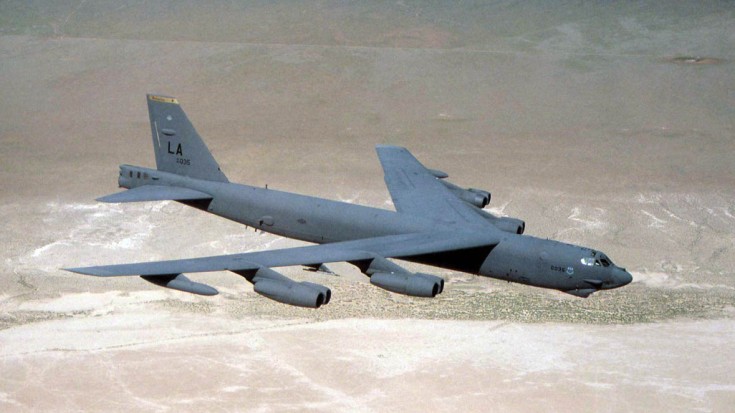 The BUFF Is Here

The Boeing B-52 Stratofortress has participated in numerous battles and has gone down in history as one of the most reliable war birds ever built. With continuous support and upgrades to its system, we’ll be seeing more of the BUFF in the next 20 years or so.

Here are some interesting things you NEED to know about this veteran:

This strategic bomber, despite being introduced in the 1950s, is still in active service and shows no sign of retiring — it’s been upgraded so it can serve well into the next 10 or 20 years. It was built to replace the Convair B-36 “Peacemaker” as the Strategic Air Command’s primary nuclear weapons delivery vehicle.

You can seldom hear air force personnel calling it by its official name which is Stratofortress. It’s popular for its nickname BUFF or Big Ugly Fat F****r (or Fellow, for the modest ones) because of its huge airframe — with a wingspan of 185 ft, length of 160 ft. 11 in., and height of 40 ft. 8 in.

3. This was designed as a tribute to General Curtis LeMay.

He saw and understood the growth potential of the bomber. Known as the “Air Boss”, Curtis was a remarkable tactician and he has led a pretty controversial career. He was once quoted saying, “If you are going to use military force, then you ought to use overwhelming military force.”

4. The B-52s were invaluable during the Operation Desert Storm.

This massive air campaign started on January 17, 1991 and ended on April 11, 1991. The general offensive was aimed at the destruction of Iraq’s Air Force. Seven B-52s held the record for longest-distance combat mission as it participated in the first sorties . They started with low-altitude bombing missions and eventually moved on to higher altitudes. During the entire airland conflict, the the B-52 has engaged in a total of 1,620 sorties and delivered 40% of the aerial weapons.

It can provide assistance to the US Navy for any anti-ship operations in addition to mine-laying missions. In monitoring 140,000 square miles or about 364,000 square kilometers of ocean surface, two B-52s can accomplish the task in just two hours.

A mixed ordnance of bombs, mines and missiles can be loaded into its internal bomb bay. It can even be of various configurations. Although a 20 mm (0.787 in) M61 Vulcan cannon was originally mounted on the H model, it has been removed since 1991.7. The cost-per-flight-hour is $72,000.

For the Operation Coverall, a B-52G was carrying two Mark 39 nuclear bombs when the pilots lost control of the aircraft, the right wing gave out and the plane eventually broke in mid-air and released the payload. Though the five out of six stages in the arming sequence have been completed, the switch was still in the safe position which is why the bombs were still intact.

8. BUFF has a unique ejection system.

The crew of five each have ejection seats. Two of those (navigator and radar navigator) eject downwards through the hatch openings. A thruster unlocks the hatch while gravity and wind remove it. The other three ejection seats for the pilot, copilot and electronic warfare officer eject upwards.

The X-15 is the record holder for the fastest manned powered aircraft. When the B-52A was modified, it was redesignated as the NB-52A which is often called “The High and Mighty One”. The NB-52B was then made into an X-15 launch platform.

11. They played a significant role during the Operation Allied Force.

This was the NATO bombing of Yugoslavia during the Kosovo War. The air strikes began on March 24, 1999 and ended on June 10, 1999. Seven B-52s were deployed and which launched conventional air launched cruise missiles (CALCM). Most of the strikes from the BUFF were near Gorshub.

12. There were cabin temperature problems in the earlier models.

Technical issues were fairly common in earlier operations. The cockpit was often heated by the sunlight, uncomfortably so. The crews in the lower deck, however, had to endure the ice-cold floor. If the temperature accommodated the pilot and those in the upper deck, it would be freezing to those at the bottom. On the other hand, should the bottom crew be prioritized, the heat would be too much to bear for the pilot.

America’s “big stick” may be one big ugly fat fellow but it does the job. Provided it will continue in service until the 2040s, it will undoubtedly be a heck of a warbird. We’d love to see those upgrades!