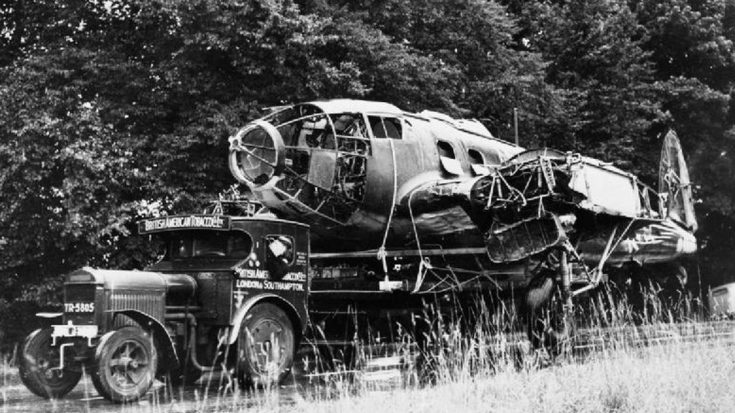 The Battle of Britain was one of the most epic air battles of all time. Lasting from July 10th to October 31st, 1940, it was a defining moment for the United Kingdom and gave Germany what many call their first major defeat during World War II.

The price of that wasn’t cheap however. Over those four months, the U.K. lost 544 airmen while 422 were wounded. Germany on the other hand, lost 2,585 pilots and had 735 wounded.

In addition to these numbers, there were 90,000 civilian casualties, almost half of them fatal. This was due to Germany’s determination to beat the U.K. into submission and carrying out night raids which oftentimes hit civilian targets.

U.K.’s pilots did a fantastic job fending off Germany no matter how hard they tried however. Below you’ll find 19 pictures of downed Luftwaffe planes. Now imagine that there were 1,958 more just like them scattered all over the U.K. during that time.

^Soldiers and locals stand around a Junkers Ju-88A-1 after it was shot down by No. 17 Squadron Hurricanes.

^A downed Junkers ju-88 is guarded by soldiers.

^The wreckage of a Heinkel He 111P which was shot down near what is now Heathrow.

^Members of a technical college inspect the workings of a downed Messerschmitt Bf 108-E4 “Red 2.”

^Soldiers ride on the wreckage of a Heinkel He 111.

^A member of the Home Guard takes a picture with a Bf 109-E-4 which belly landed in Kent.

^Soldiers examine the wreckage of a downed He 111H in Sussex.

^Heinkel He-111 is hauled away to a scrap yard.

^Soldiers inspect a downed Heinkel He-111 which hit a house.

^A Junkers Ju-88A-1 is hauled away after being hit with AA fire.

^RAF inspects the wreck of a Junker Ju-88 shot down during a reconnaissance mission.

^Soldiers takes a look at the cockpit of a shot down Messerschmitt Bf 109.