After 80 Years Of War Crimes China Has Had Enough 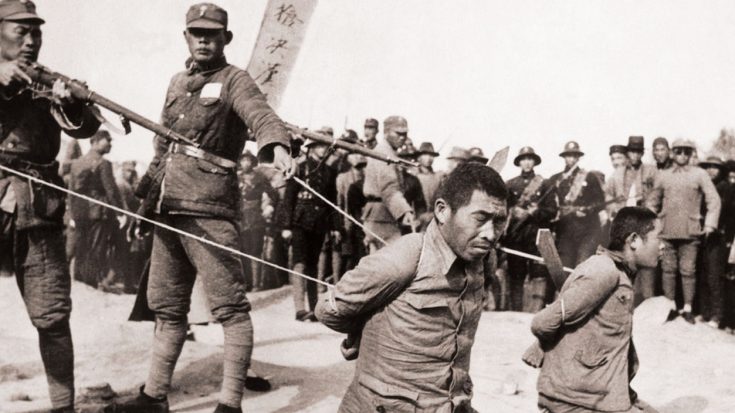 It has become routine these days to hear about China’s military acting out against other East Asian nations. All around the South China Sea, the Chinese army is building bases on islands belonging to other countries. Although the Philippines and South Korea voice their displeasure with the military presence it is obvious China is aiming for Japan. Confrontation is building towards a head as Japan develops fighters while calling upon the United States to aid their defense. These feuding nations are not on the friendliest of terms but where did it all come from? The story goes back almost 80 years to one of the most horrible war crimes in history.

In 1937 Japan began expanding their empire throughout East Asia and obtain resources for their growing population. As the Japanese army conquered China’s former capital the occupation that followed became known as “The Rape of Nanjing”. Over the course of six weeks over 200,000 civilians were massacred, 80,000 women and children were raped by soldiers while bodies piled up in the streets. Soldiers even held contests to see who could be the first to kill 100 civilians with a samurai sword. After their surrender records of the massacre were destroyed and the Japanese Government claiming the reports were exaggerated by Chinese nationalists. Despite their claims of exaggeration, the Rape of Nanjing has gone down as one of the most horrific moments in human history.

“Japan has done wrongs to the Chinese people, the Government refuses to admit the facts this is absolutely wrong. We need to correct the mistakes, this will make the relations between China and Japan better.”

To this day the Japanese Government has yet to issue a formal apology or even acknowledge their war crimes. Many believe that Japan’s Prime Minister Shinzo Abe should take responsibility for his country’s actions during World War II as tensions continue to rise between the two nations. CBN News takes a deeper look into the Japan’s war crimes in this footage.