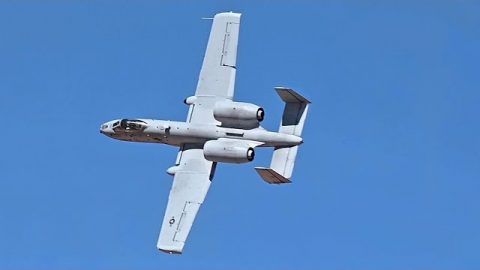 The US Air Force A-10 Thunderbolt II was seen taking off the skies a conduct pilot training at the Barry M. Goldwater Range in Arizona. The aircraft showed off its capabilities by firing its mighty guns on its target during a live fire exercise. You can hear the famous ‘brrrrrt’ sound a few seconds after firing.

The A-10 Thunderbolt is a single-seat, straight-wing, subsonic attack aircraft, and was designed to offer close air support to friendly ground troops by attacking tanks, armored vehicles, and other enemy ground forces.

The plane captured in the video is a ground attack aircraft of the 357th Fighter Squadron which is assigned at the Davis-Monthan Air Force Base and was taken last October 28, 2022.

Did this live-firing exercise blow you away?