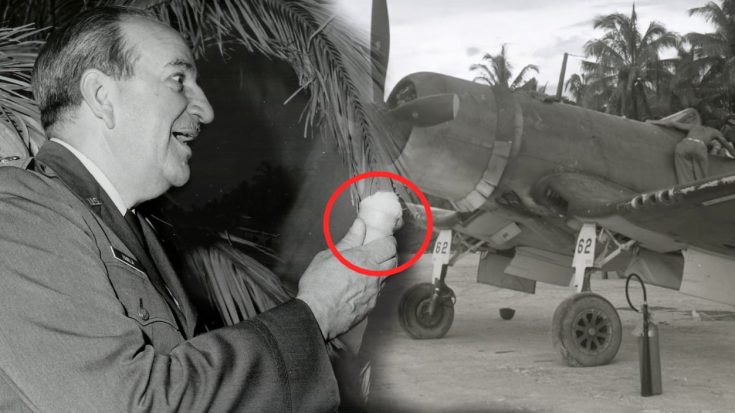 What do you get when you have bored WWII pilots on a hot island with access to Corsairs? Well, the possibilities are pretty endless. But one sweet-toothed squadron commander named J. Hunter Reinburg had just the right morale-boosting idea.

By September 1944, U.S. Marine fighter squadron VMF-122 didn’t have much to do. The Japanese were close by but posed no threat since they were cut off from supply lines. They wouldn’t come up for a fight.

So, bored, hot, and sticky, Reinburg proposed a plan. He had his maintenance crew cut the ends off a drop tank, strung wire across it, and inserted waterproof bullet cans. But instead of bullets, they poured in a tasty mix of canned milk and cocoa powder. At least they hoped that it would be tasty once it took a trip up to freezing high altitudes and came back down as scrumptious chocolate ice cream.

The first test didn’t work. The mixture was cold, but not frozen after 35 minutes. They thought it may have been too close to the hot engine.

Oh, by the way, Reinburg was testing this out over Palau while he was being shot at by the Japanese. The anti-aircraft fire couldn’t get anywhere near him at 33,000 feet, but that’s still pretty badass.

The crew had to get a little more creative for the second attempt. This time they  bolted the ammo cans under the removable maintenance panel on each wing. This would make about 10 gallons, enough for 100 men. The mixture froze. However, Reinburg wasn’t satisfied. He thought the ice cream was too flaky.

You really have to hand it to this crew – they were determined. For the third test, they gave the ammo cans small propellers to churn the mixture while the wind turned them. Genius! After just three tries, they achieved the ultimate smooth and creamy chocolate ice cream.

Operation Freeze soon turned routine (understandably). Word has it that group operations officer Colonel Caleb Baily (who apparently hadn’t been invited to the ice cream parties) caught wind that all these “test flights” were not really test flights.

“Listen, goddammit, you guys aren’t fooling me. I’ve got spies. You tell [Reinburg] I’m coming over there tomorrow to get my ration.” -Colonel Caleb Bailey

We don’t blame him!

Also, these geniuses weren’t the only ones to try this. A 1943 New York Times article wrote about B-17 crew bombers making ice cream on their bombing missions and at least one unit of P-47s also thought of doing the same.