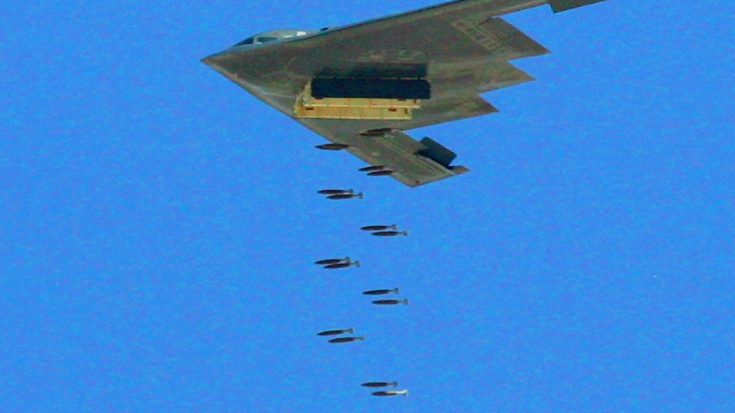 The Northrop Grumman B-2 Spirit is the world’s most advanced bomber capable of striking targets. Many of its stealth features remain classified nearly 30 years after its introduction and the guys who operate it plan to keep it that way. However, the US Air Force isn’t shy about it about its weaponry and destructive capabilities.

The element of surprise is quite possibly the greatest asset to the B-2 allowing it to sneak into areas without detection. When it reaches its destination it has quite a powerful payload of weapons it can deliver. The B-2 Spirit is said to be able to carry up to 50,000 lbs of munitions some individual bombs weighing up to 2,000 lbs.

“Currently, the B-2 is the most expensive aircraft ever built. The USAF operates only 20 of these strategic bombers due to their high price. This advanced aircraft was never offered for sale to any other country, even NATO allies.”

This video shows a demonstration of just how many bombs the B-2 Spirit can carry in its arsenal. So check it out as 80 bombs are deployed and blasting up this unfortunate target range before it gets turned into a pile of ash.

It’s one heck of an aircraft and a badass through and through. Back in 1997 when it was first introduced, the cost of each unit was already $737 million! But looking at the features, it’s absolutely worth every penny. Still, the operating costs made it controversial in the US Congress.

Fun Fact: It can fly to anywhere in the world in a matter of hours because its range is more than 10,000nm with one refuelling and over 6,000nm if unrefuelled.

With the amount of bombs it can hold, it’s almost unreal and unbelievable. It’s power is clearly no joke. When it arrives, you just now it means business.