B-26 ‘Flak Bait,’ Which Flew 207 Missions In WWII, Is Finally Being Restored 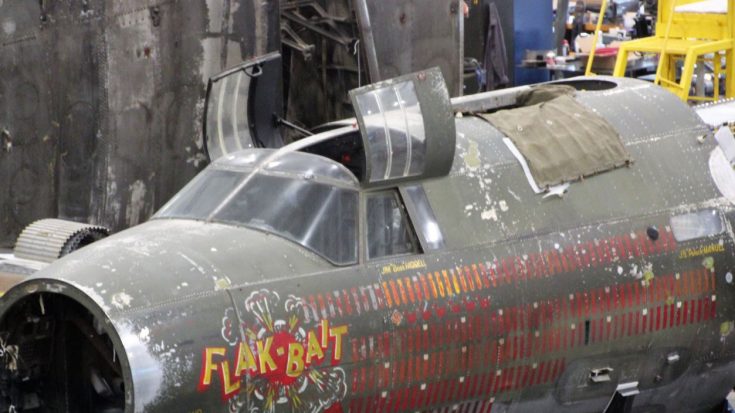 This is a truly historic moment as this B-26 Marauder is going through a restoration phase. There are only 3 airworthy B-26s in the world as of this writing, with only 3 other ones at various museums. Once this one is done, it’ll be on display at the National Air and Space Museum in Virginia.

Not only is this aircraft type rare, but this particular aircraft is also almost legendary. Built late in World War II in 1943, this airframe was assigned to the 449th Bombardment Squadron, 322nd Bombardment Group and flew a stunning 207 missions in just under two years.

Just a few of its notable adventures include:

As you can see in some of the pictures, the side of Flak Bait (which will be preserved) shows a long string of red bombs. Unlike any other aircraft, each of these tallies represents 5 missions, not 1, as there were just too many to fit. Also, if you look closely, you’ll see a Swastika on the side as well as the crew managed to shoot down a Germany fighter on one of their missions.

The museum did not give a specified time of when the restoration will be complete, but by the pictures posted on their Facebook page (seen above), we can deduce things are well on their way.

You can see a quick yet informational clip of this aircraft below.