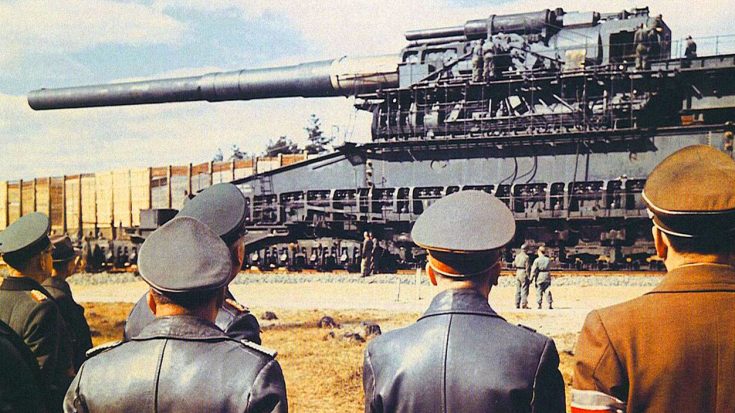 Named after famed artillery designer Gustav Krupp, it wasn’t just the biggest gun of WWII, it is the biggest gun in history. The Gustav had a barrel length of 106 feet and could fire 800mm shells a distance of 30 miles. It was so big that it had to be transported by rail tracks laid down by over a thousand men. The artillery rounds were so big and time-consuming in the loading process that it could only be fired 14 times per day.

It was originally intended for use in the siege against French Maginot Line but never had the opportunity to engage their massive fortress. Instead, the Gustav was used to combat Soviet Russia in the siege of Sevastopol. On average it took only six shots from the Gustav to completely decimate the major Russian fortresses and raze entire cities.

“The Schwerer Gustav entered combat during the German siege of Sevastopol in June 1942. The gun was manned by a crew of over 1400 men, 250 to assemble the weapon, two anti-aircraft battalions to protect it, and the rest to load and fire the weapon.” 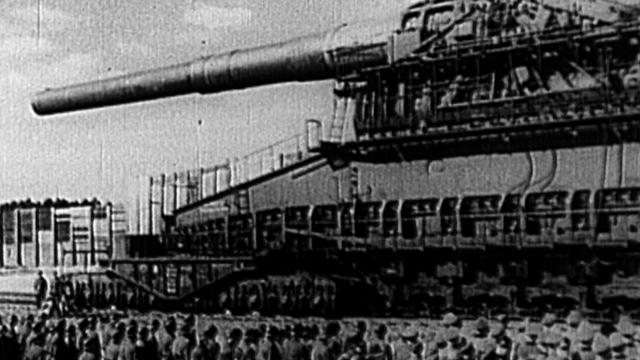 In the end, the Schwerer Gustav proved to be more trouble than it was worth. The limitations of rail travel, restricted access to areas where it was needed the most and its size made it an easy target for bomber aircraft. Shortly after their surrender, the Gustav was destroyed by German troops to prevent it from falling into the hands of the Soviets.

This historic footage shows the only time that the world’s biggest gun was used in a combat operation. Witness history as the Schwerer Gustav unleashes pure destruction in the siege of Sevastopol.