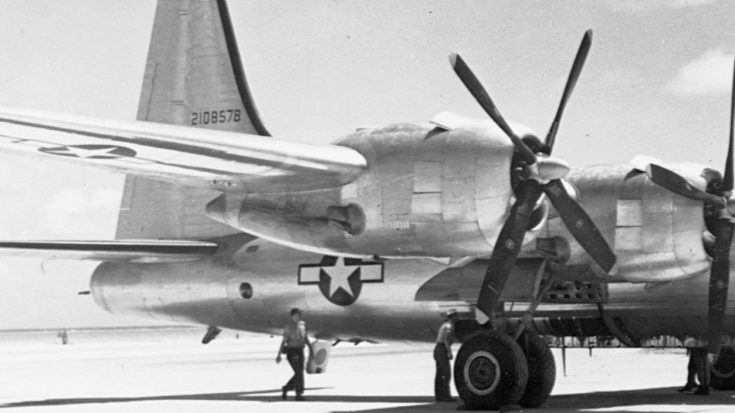 As World War II drew to a close in the Pacific the Boeing B-29 took center stage as the newest and deadliest bomber around. The B-29 brought many new innovations to the table as far as military aircraft were concerned but it was not the only plane up for the role. There was another challenger threatening to overtake its position, the B-32 Dominator.

Originally designed as a companion to the B-29 Superfortress, the B-32 Dominator was a great bomber with some differences. Being the Heavy Bomber category it was intended to fly high altitude bombing missions but it lacked a pressurized cabin thus it was regulated to medium altitude missions. Its powerful engines allowed it to taxi backward which added versatility relieved problems on airfields. In the end, a little over 100 B-32s were built because the US Army Air Force decided that the B-29 was the better bomber. But the B-32 Consolidator did get the chance to see some combat.

“In reality, the B-32 was a fall-back aircraft in the event that the complex, technology-laden B-29 did not meet its expectations as the nation’s premier heavy bomber of World War II.”

In the closing days of WWII, the few B-32s in operation conducted scouting missions over bombed areas of Japan. This attracted the attention of over a dozen Zero fighters who went to intercept the B-32s and fighting broke out. The gunners of the B-32 managed to take down two Zero fighters before driving away the group. Some of the crew onboard sustained bullet wounds and this went down in history as the final combat of WWII.