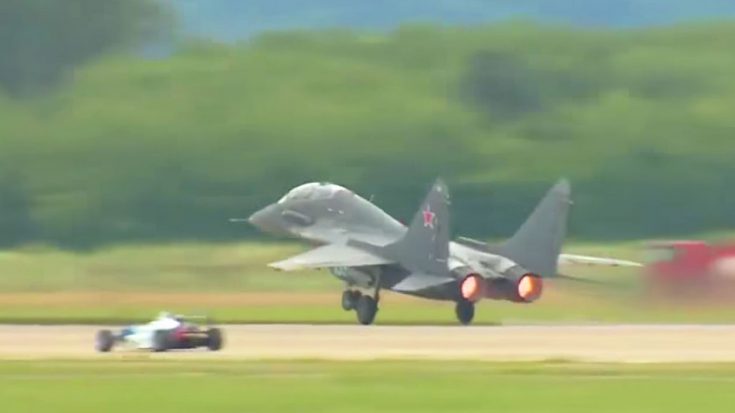 Race Of The Century.

The Miyokan MiG-35 has been in development for the better part of a decade before its big reveal earlier this year. Since then it has made waves across the news claiming it is the jet to beat the top American fighters. Only recently has it been deemed combat-ready, before that point it has been getting a lot of press at publicity appearances.

At the MAKS Airshow, the MiG-35 got to strut its stuff in front of a crowd of almost half a million people. Audiences were treated to aerobatic displays of the next big Russian fighter as it prepared for a formal launch.

“MAKS provides a unique opportunity to experts in the field and businessmen for establishing multi-level connections, further developing industrial cooperation and finding new business partners. The key role of the Aviation Salon as a generator of new alliances and productive ideas is recognized worldwide.”

The airshow also brought in some race car drivers who tried their luck on the track against the MiG-35. This driver might be getting a little over his head taking on a fighter jet in a race but it is still very entertaining to watch.