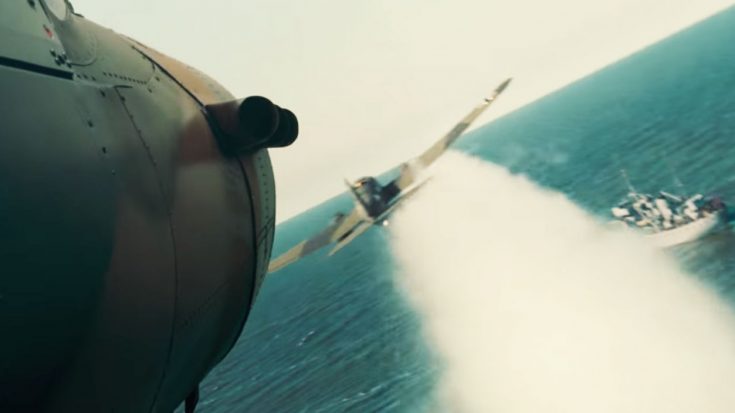 We’re going to try and not boast about Christopher Nolan (the director of this film) too much as personally, we’re huge fans. He’s the master of creating suspense and pertaining to this article, is a big proponent of physical effects.

A part of his latest movie called Dunkirk is spent in the air with the Royal Air Force trying to fend off Germany’s fighter aircraft which were attacking the trapped soldiers on the beaches below. Now, most directors would have put up a green screen, collected some “gun firing sounds” that were probably off from the real guns used on Spits and Bf-109s and called it a day.

He got his hands on a couple of Spitfires which he used for the movie as well as a Hispano Buchon which was repainted to look like a Bf-109. Sure, not the same thing but still more realistic than the clip you’ll see below. Also, he used massive scale remote-controlled replicas of other planes such as the He-111 you saw above. Although not the exact one used in the movie, it will give you an idea how you can take something like that and make it look realistic with the right man behind the camera.

All in all, he captured the tightness of the cockpits and the sounds and feeling of these dogfights in a way we’ve never seen before. Check it out for yourself and let us know what you think in the comments.

For comparison, watch the dogfight from the 2012 movie Red Tails.

This is truly sad as the movie was based on a really great story from World War II. We’re sure most of you know about the Tuskegee Airmen who were the first U.S. all African-American squadron and really kicked some serious German butts. When you watch the movie, however, the CGI and poor storytelling lose the powerful message it should in essence convey.

Maybe someone will give it another crack one day.