The First Jet With A Nuclear Arsenal 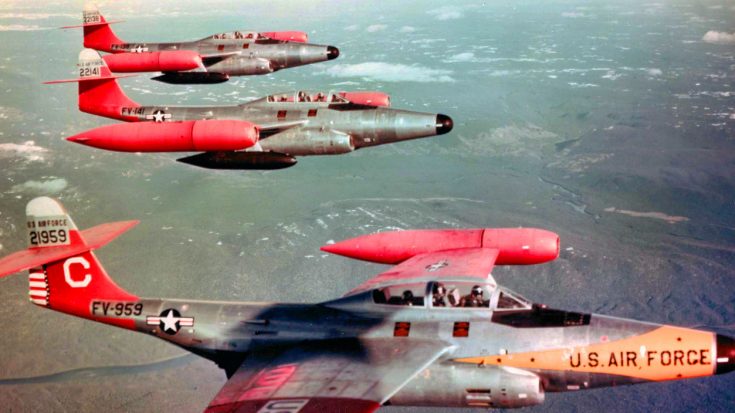 The late 1940s was a time of extreme tension, fear, and uncertainty for the United States. Germany and Japan had fallen during WWII but the threat from the Soviet Union was on the rise. As Russia was developing nuclear weapons the United States decided to step up theirs as well. From this came one of the most innovative fighters of the early Jet Age, the Northrop F-89 Scorpion.

Upon its introduction in 1950, Scorpion served as an interceptor aircraft against Soviet strategic bombers. The defining feature of the Scorpion was its use of the Genie Rocket, making it the first plane with an air-to-air nuclear arsenal. In total, the F-89 carried over 100 rockets, each capable of destroying a Soviet bomber.

“During its career, the F-89 equipped 36 active Air Force Units and 17 Air National Guard squadrons. One of the most heavily armed fighter aircraft, the F-89 was the backbone of the North American Air Defense Command for more than 17 years. The F-89 was the first multi-seat, all-weather jet interceptor.”

Unfortunately, the F-89 had a flaw in the structure of its wings which hindered flight performance. Surviving F-89 Scorpions are not flyable and remain in displays in Air Force Museums. Footage of the Scorpion in action is rare, but you can see what it was capable of in this clip.