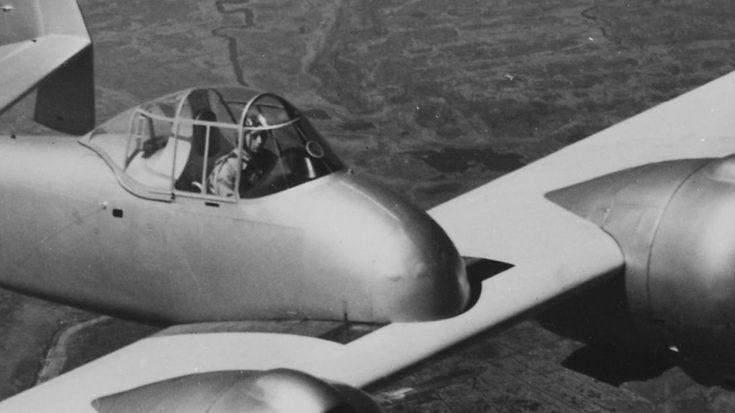 Onc can argue that Grumman aircraft were the reason the United States won the war in the Pacific Theater. As they produced the most widely used aircraft for the Navy, the company’s kill count was astounding. Not to take anything away from Vought’s Corsair which was highly effective, it was the Wildcat and Hellcat that did most of the dogfighting against Japan over open waters.

As both of these aircraft are widely known, we noticed that there was something missing between the two. What went between the F4F Wildcat and F6F Hellcat? What about the F5F? Well, we did some digging and there is one aircraft (literally one) that was experimental.

Meet the Grumman XF5F Skyrocket. First taking off in April of 1940, this design was ordered by the Navy as a fighter interceptor. Its unique design of having the nose of the aircraft behind the leading edge of the wing and propellers which rotated in opposite directions gave it an excellent rate of climb and a top speed of 383 mph, about 50 mph faster than the Wildcat and Hellcat.

“for instance, I remember testing the XF5F against the XF4U on climb to the 10,000 foot level. I pulled away from the Corsair so fast I thought he was having engine trouble. The F5F was a carrier pilot’s dream, as opposite rotating propellers eliminated all torque and you had no large engine up front to look around to see the LSO (landing signal officer) … The analysis of all the data definitely favored the F5F, and the Spitfire came in a distant second. … ADM Towers told me that securing spare parts … and other particulars which compounded the difficulty of building the twin-engine fighter, had ruled out the Skyrocket and that the Bureau had settled on the Wildcat for mass production.” – LCDR Crommelin | Test Pilot

When pitted against the Corsair and later Spitfire, its performance was stellar as you can read in the quote above. At the end though, it was not enough to put it into full production.

Between initial engine cooling problems, landing gear issues and securing parts for the new design, the F7F Tigercat was developed as another twin propeller aircraft which flew almost 100 mph faster and was more agile. In the end, its unfortunate belly landing scarped the idea of the aircraft all together.

There is no historical footage of this aircraft in the air that we could find, but here’s a really neat RC someone built so you can at least see that aerodynamically, this thing could actually take off.