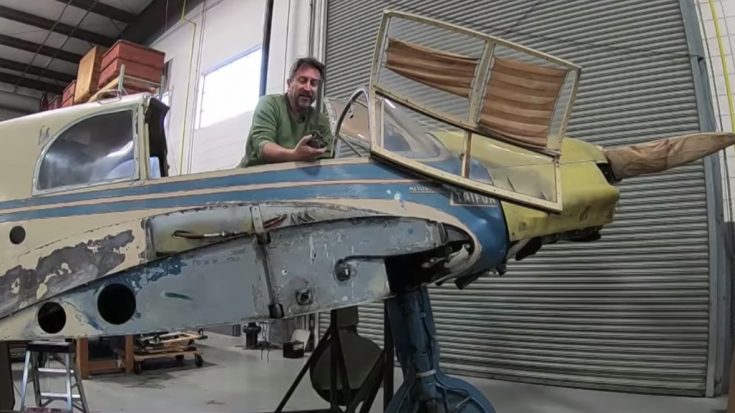 This Messerschmitt Bf-109 has found its lucky way into the hands of Fantasy of Flight restoration specialist Paul Stecewycz. And lucky us too- we get to see the progress, and the struggle (oh boy, it’s quite a struggle), of the makeover.

What’s Inside The Tail

Stecewycz squeezes through the plane to emerge inside the tail where he shows us the fuel tank, untouched since 1938, as well as other nifty features. But what else he finds is much cooler; various writings and drawings.

The first is a scribbled note in Spanish stating that the plane was repaired in May and June of 1944 by L. Hinojoza and L. Orrivega. Next, there’s a partial sketch of the added fuel tank. Then, above his head, he finds two drawings of the Chilean flag and two big fat swastikas.

Stecewycz speculates that whoever was back there was probably a Nazi sympathizer. The plane clearly spent some time in Chile where there was quite a bit of Nazi influence. The symbols, however, do face the wrong direction. but considering the time and where this plane came from, it’s highly likely they were meant to be swastikas.

This plane has a rare history; it’s the only Bf 109 Taifun that was ever operated in Chile by a Chilean airline. It was once owned by Deputy Carlos del Campo Riveros as a private plane. The Messerschmitt then passed on to LAN, and again back into private hands. We’re not quite sure how it ended up in U.S., but it’s thrilling to see it here on the Kermit Weeks Hangar YouTube channel getting lots of attention!

Watch the video below for a look inside! It’s a long one, but we’ve started you from where he crawls into the tail.