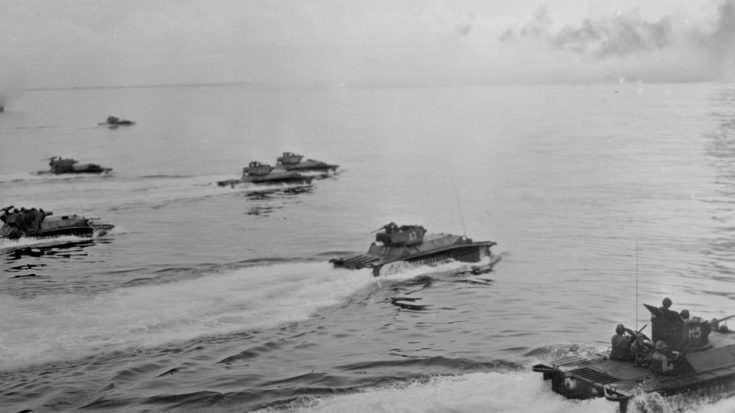 One of the most underrated machines of WWII has definitely had to be the Amphibious warfare vehicles. A lot of people don’t realize how essential they were to victories in WWII because other heavy vehicles tend to get all the credit. But by land, by sea, the Landing Tracked Vehicle (LVT) could do it all.

Also known as the Amtrac, these amphibious tracked vehicles traveled from naval vessels, across bodies of water and into combat zones. Their primary function was for transporting up to 18 troops and cargo. They were also equipped with multiple .30-caliber machine guns and a .50-caliber machine gun to fend off threats.

LVTs mainly saw use in the Pacific Theater of War in major combat zones such as Iwo Jima and Guadalcanal. The versatility of the LVT demonstrated that it was able to bring in troops, transport out injured ones and provide cargo to sustain the fight. Early models of the Landing Tracked Vehicle lacked thick armor, making them vulnerable to attack from the Japanese but was fixed in later models.

It is safe to say that the Landing Tracked Vehicle made things a lot easy for the Allies in their battles against the Japanese and many units owe their lives to them. Check out this archival of an LVT in action in the Pacific Theater of War to get a better idea about them.