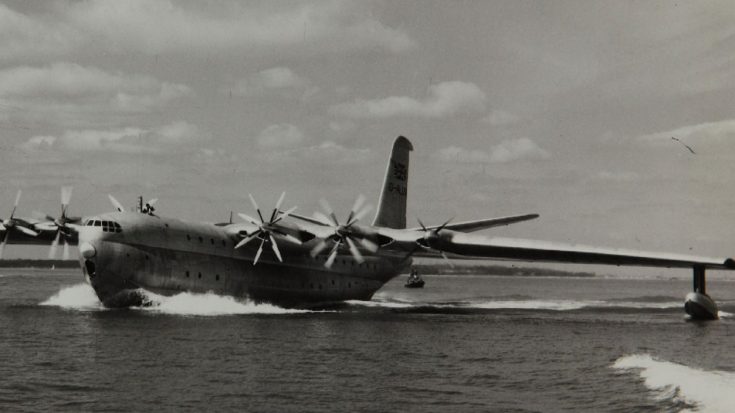 She Was A Big Girl.

Meet the Saunders-Roe SR.45 Princess as she was designated, but people typically just called her Princess. Or at least the people who knew about her. Only 3 such examples were ever built, with only 1 actually taking flight. The footage below is of that flight.

The Princess had a total of 47 test fights and even appeared at an airshow during her short life.

This post-World War II concept was a build on Britain’s previous operational flying boats like the Short Empire. Although the project was postponed until the early 1950s due to the war, the Princess was built as a “spacious and comfortable” way to travel between London and New York City. Almost 150 ft. long and wingspan of nearly 210 ft., it had the capacity to carry over 100 passengers in its roomy interior. Using the then-new turbo-prop engines, it could reach speeds of up to 380 mph.

In the end, however, the project was scrapped.

As it is with governments and budgeting, the long process of finding out the feasibility of such aircraft took a long time and the 3 planes were put in storage. After a considerable amount of time, when a buyer was found, the planes showed awful signs of corrosion and were cut up for scrap.