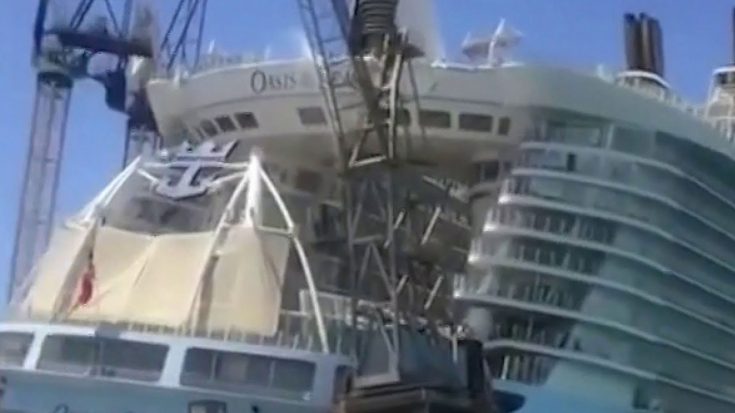 On April 2nd, 2019, a construction crane collapsed on top of a Royal Caribbean cruise ship, hurting at least 8 people according to reports. There were no passengers on the ship during the accident as the ship sat in the dock in the Bahamas between trips. The 8 workers did suffer injuries but local medical centers luckily labeled them as “none life-threatening.”

BP BREAKING| Bahamian police on Grand Bahama confirms an accident that occurred at GB Ship Yard. Police nor our teams on the ground can confirm if anyone has been injured… pic.twitter.com/dPOjnR0vFD

A passerby managed to record the extent of the damage right when it happened. Saying, “Big accident on the shipyard on the Big Oasis…Dock 2 is finished…Big, big, big, big disaster,” indicating that the entire dock was also damaged during the accident.

The ship involved was the Oasis of the Seas operated by Royal Caribbean International. This class of ship can carry over 5,400 passengers on its 16-level deck structure and costs close to $1 billion dollars. What might seem a “minor” incident judging by the video above might actually cost the company millions of dollars to fix.

The ship is currently being assessed for damage and Royal Carribean canceled all upcoming cruises involving the ship. The company did do right by their customers by releasing this statement, “Given this late cancellation, we will also provide you with a Future Cruise Credit valued at 100% of your cruise fare paid on your canceled sailing,” also adding they’ll reimburse travelers for airfare when applicable.

You can watch the full WKMG News 6 report below.