Navy Photographer Blends Photos Of Pearl Harbor Then And Now 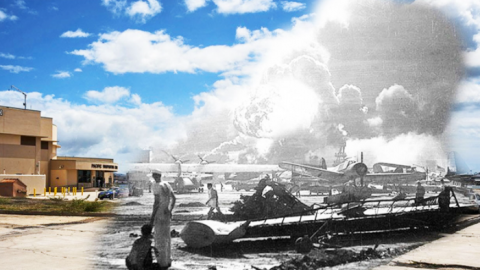 A Day That Will Live In Infamy.

On December 7th, 1941, Japan dragged the United States into World War II by attacking Pearl Harbor. By the end of that day, 2,335 Americans were dead with 1,143 wounded. The Pacific Fleet also suffered tremendous equipment damage and losses. The war has begun for the United States.

Fast forward 76 years, Americans still remember and commemorate what happened on that day, with one Navy member creating something that’s never been done before. Mass Communication Specialist 3rd Class Diana Quinlan took historical photos from December 7th, 1941 and captured the same places today. She matched up the angles and perspectives perfectly. Then, she combined the two to make an eye-opening comparison between life now and what it was to have been there back then.

Here are the pictures and some short descriptions.

^Soldiers defending the skies while hunkered down on the ground.

^More soldiers defend the skies of Pearl Harbor from waves of Japanese aircraft.

^A bombed out hangar on Pearl Harbor after Japanese planes tried to squash U.S. airmen before they left the ground.

^USS Arizona burns in the background.

^USS California and USS Arizona burn while crews are trying to get to safety.

We also found a video which displays these pictures while a veteran who lived through the attack talks about what happened. It’s very serene and really puts into perspective the horrors of that day and the valiant efforts of all the personnel stationed there to fight back.