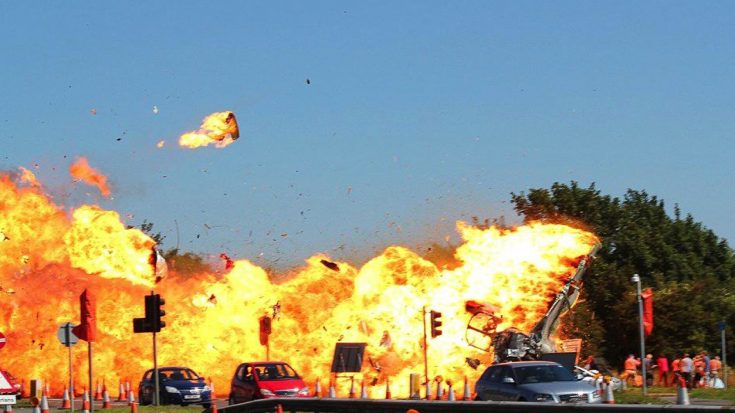 In 2015, the annual Shoreham Airshow was going according to schedule. During the opening part of the event, a 50s era jet fighter, the Hawker Hunter T7, was to perform its typical routine. Manned by Andy Hill who witnesses called an experienced pilot with over 12,000 flight hours in both military and commercial settings, the routine didn’t call for anything exceptional.

Right before the crash, Hill performed a low pass next to the crowd and was to exit with an inside loop. The maneuver is typically started at 500 feet off the ground but Hill pulled up from 200 feet leaving “no room for misjudgment” according to an expert.

Hill was unable to complete the loop and regain altitude at the end of the maneuver, crashing into the A27, a busy road in Shoreham. The aircraft broke apart into four pieces and wiped out cars on the road, the jet fuel spilling out and causing a massive fireball to erupt. You can see the footage below.

Hill asserted he blacked out due to g-forces when coming out of the loop which caused the crash. His chair got ejected upon impact, he stated, which is why he survived although with multiple injuries.  The prosecution is now contesting that fact which is critical as it separates this incident from being an accident and manslaughter.

Expert aviation witness Jonathan Whaley told the jury all the movements of the aircraft were calculated and under the control of Hill until the crash. He also went to state that since Hill didn’t have the altitude necessary to complete the loop he shouldn’t have committed to it, something he called “fundamental” in aviation.

It’s up to the jury to decide whether the crash which killed 11 and injured many others was an accident or negligence.