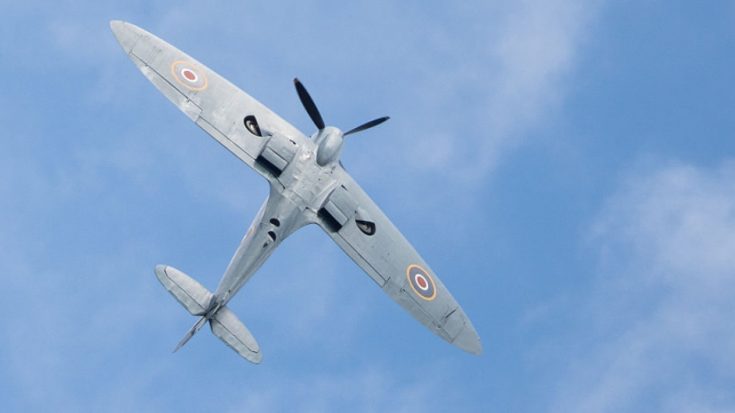 Check out this clip of  a low flying Spitfire making passes over a train.

It’s actually a scene from the Czechoslovakian film, “Dark Blue World.” “Dark Blue World” (2001), directed by Jan Sverak, explores the role of Czech pilots in the British Royal Air Force during WWII and what become of them after returning to their home country. The film’s plot revolves around a love triangle much like “Pearl Harbor,” but the flying sequences are something to get excited about.

This scene in particular, with the low flying Spitfire and the train, was the most expensive scene in the entirety of Czech cinema history. The rental rate of a Spitfire cost a startling $10,000 per hour, racking up the film’s total cost to $7 billion, which was considerably large for a Czech film at the time. For this reason, there are actually only two flying Spitfires in the film; Nigel Lamb flies the Mk Vb (BM597) and Robs Lamplough flies the Spitfire Mk.VIIIc (MV154). Ray Hanna is also listed in the credits as a pilot.

And what a great scene it is. The rich sound of the Spitfire’s Merlin engine dominates the green Czech landscape as it races by the train repeatedly. It’s thrilling to see  a plane like that get so incredibly low to the ground, especially when you know the cost of renting one. But in the hands of the skilled pilot, there’s nothing to worry about. We’re just lucky that this gem of a scene exists. It’s certainly a cinematic standout- this is what what all war movies should consist of!

Even the clouds wanted to show what a special occasion it was. Can you spot the Spitfire shaped cloud at 1:18?