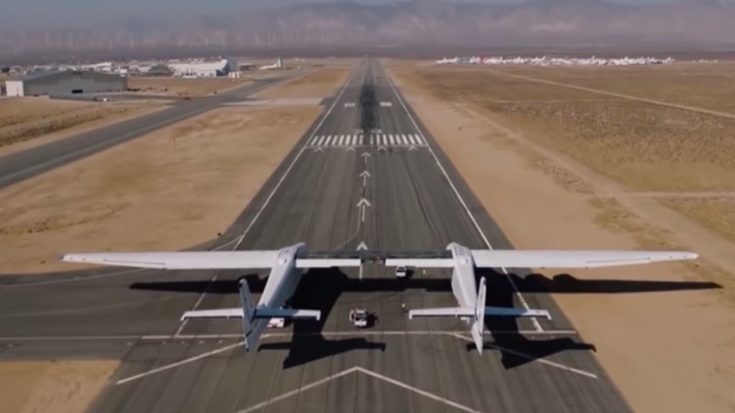 The massive plane with a 385 ft. wingspan

Here we have the Stratolaunch, the most massive airplane, by wingspan, ever built. A mind boggling 385 feet wide, it boasts six Pratt & Whitney turbofan jet engines which were salvaged from not just one, but three, 747s. It has eighty miles of wiring and a take-off weight of 1.3 million pounds. Each wing weighs 18,000 pounds. And, as you can see, it has two fuselages. Only the right one has a cockpit; with the left one 100 feet away, it’s quite a test of spacial awareness for the pilot.

This ambitious project hasn’t yet lifted off the ground. It’s supposed to become a flying launchpad for rocket ships, revolutionizing the world’s access to space. However, three years behind schedule, this supersized beast runs the risk of becoming obsolete as other projects in the private space industry flourish. Once a partner to the Stratolaunch, Elon Musk was going to build the SpaceX rockets that the Stratosphere would carry. Musk is now the thriving competition, quickly pushing the limits on what we think is possible in space.

Will it take us to space?

The Stratolaunch finally got out of the hangar on May 31, 2017 and began ground testing in the Mojave Desert. We’re promised that we will see its first launch some time in 2019. That’s nearly eight years after the plane’s conception. Here’s wishing to the Stratosphere’s success- otherwise we’re looking at a case of something that just took too long but, either way, it’s sheer scale is something that is impressive all on its own. What do you think of this giant?