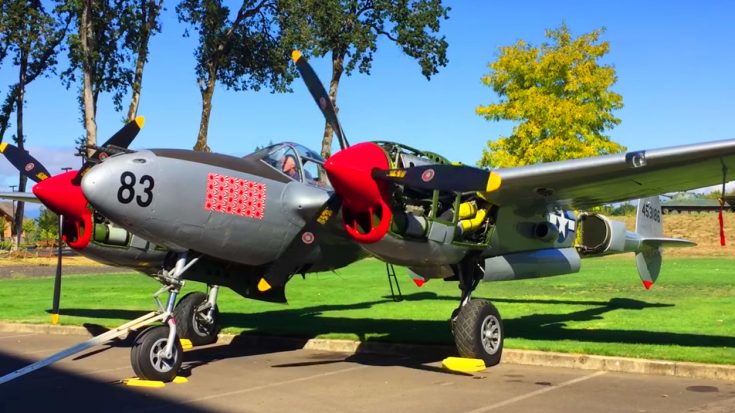 It isn’t every day when you get to see a P-38 Lightning come to life but today is that day. This P-38 is still in amazing condition and the engines still roar loud and clear. Bearing the mark of 24 downed Japanese planes this P-38 couldn’t look any better than it does now.

The definitive heavy fighter of WWII never fails to draw a crowd when they start to rev up its engines. Once the propeller blades start spinning and hit 2600 RPM the trees behind the plane even start shaking from its intense power.

“Upon its official introduction in 1940, the P-38 was capable of climbing to 3,300 feet in a single minute and reaching 400 mph, 100 mph faster than any other fighter in the world. It also doubled as an intimidating long-range threat, capable of carrying a larger payload than early B-17s and boasting a range of 1,150 miles.”

Kelly Johnson would be proud to see one of his greatest planes performing well 75 years later. The crew here has done an incredible job keeping this P-38 Lightning in prime condition. Don’t just take my word for it, go see this P-38 come to life and hear just how loud those engines can roar.