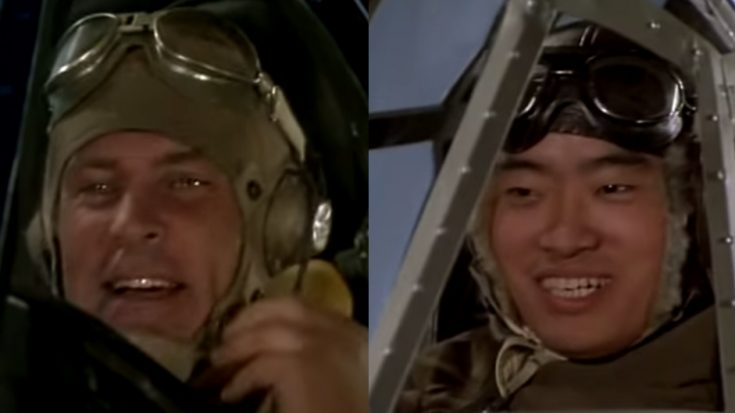 “Baa Baa Black Sheep,” the TV series loosely based on ‘Pappy’ Boyington and his Black Sheep Squadron during WWII, aired on NBC from 1976 until 1978. One look at Boyington and it isn’t hard to see why his story would be a great fit for Hollywood. He was charismatic, bold, and a total wildcard. “Baa Baa Black Sheep” brought a bit of bravado and humor to the otherwise sobering subject of war.

Boyington and Hirachi shooting each other down and sharing a cigarette on an island is one of the most memorable scenes of the show. The two aces chance upon each other just as Boyington is having trouble with his plane. Their rivalry is almost friendly as they banter over the radio, even as Hirachi takes advantage of the situation and fires on Boyington.

Not to be outdone, Boyington skillfully maneuvers his badly damaged plane to position himself behind the gloating Hirachi. His guns hit Hirachi and send him spiraling down in smoke. Still chatting, both pilots parachute out and float gently to the island as their planes meet a fiery demise.

Then we see Boyington, not a bit frazzled, pick up his radio and call Hirachi to ask for his location. The gesture is hilariously nonchalant. Casually lounging in a tree, Hirachi answers and suggests that the two meet up at a nearby beach. Hirachi scores some American chocolate from Boyington and they sit together like old friends, continuing their banter. They will both live to face each other in the sky again.

“This time no winner. But one day, one of us will win, and the other will be very sad.” – Hirachi

The Hollywood portrayal was mostly just that- a somewhat messy war story packaged for entertainment and Hollywood glam. But heck, even if this scene isn’t anywhere near the truth, it’s wonderfully entertaining. Check out the the full clip below complete with a humorous scene of Pappy Boyington and his squadron being awarded for their achievements.